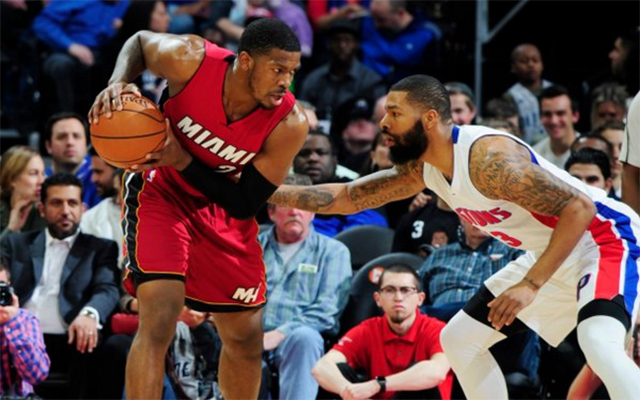 (Detroit, MI) — When the Miami Heat signed Joe Johnson, they didn’t expect him to bring his superstar potential until the postseason. But with the most important contest of the season at hand and a playoff atmosphere in Detroit, Johnson brought his A-game when it mattered most and helped push the Heat past the Pistons on Tuesday night, 99-93.

With the close outcome, the Heat (48-33) currently sit at the third seed in the East while the Pistons (43-38) lock up the eighth spot and a first-round matchup with the Cleveland Cavaliers (57-24). As for Miami, they won’t know who they face until after tomorrow’s big game against the Boston Celtics (47-34). If the Heat defeat the Celtics, they are assured of homecourt advantage. If not, they will only receive homecourt advantage with an Atlanta Hawks (48-33) loss.

It wasn’t easy for the Heat to get to this stage. With the Heat facing the Pistons, who were battling hard for their own favorable first-round matchup next week, a different type of passion needed to be exerted to come out with a win. So Johnson, coming off a seven-point game, burst for 25 points, including 15 in the fourth quarter. “Joe Cool,” as Johnson’s referred to, talked about the big play during the last quarter.

“Just getting in the teeth of the defense, making plays. It wasn’t necessarily for me but I just took what the defensive gave me and fed off that” Johnson said after scoring 15 of the Heat’s final 23 points of the game.

The seven-time All-Star absolutely took over in the fourth quarter, proving why he was such a valuable signing midway through the season. The 34-year-old made back-to-back threes and another jumper to extend the lead from one to nine with 4:16 left. Later, he faked a few Pistons defenders to throw a huge alley-oop lob to Hassan Whiteside, on one of his five assists. Afterwards, Johnson would hit two more jumpers and knocked down a triple to put the game away.

Heat head coach Erik Spoelstra had high praise on the veteran’s play and ability to make things easy for everyone else:

“He has a calming presence the way he plays the game offensively. He’s under control, he’s surveying the defense, he’s waiting for the defense to slip up or make a mistake. When you get in the last six minutes of a close game that kind of presence has a real calming effect on everybody else. We did not feel rushed or panic going down the stretch. It allowed us to have little bit more concentration on other things.”

The Heat needed Johnson to play big today after several others had a tough time finding their groove. Dwyane Wade struggled heavily, scoring just 14 points on 6-of-16 shooting. Whiteside, who excelled Sunday in a starting role, toned down tonight with 14 points, nine rebounds and three blocks.

Goran Dragic, who scored eight points in the first quarter, finished with 16 points, five rebounds and four assists. The point guard dealt with foul trouble but played hard the entire game, including a play where he lost his tooth. Luol Deng also played with passion from beginning to end; the former All-Star had a complete performance with 17 points and 10 boards in a game-high 41 minutes.

The Pistons, who were without starting point guard Reggie Jackson (abdominal strain), got a total team effort tonight but struggled from the field, finishing with just 40-percent shooting. Kentavious Caldwell-Pope led the team with 17 points and three steals. Tobias Harris and Marcus Morris finished with 16 apiece but shot a combined 10-of-29. All-Star Andre Drummond grabbed 18 rebounds in addition to nine points, two steals and a block.

Now with the first game of the most crucial back-to-back of the season over with, the Heat will play their final and most important game of the regular season against the Celtics Wednesday night. With their homecourt destiny in their own hands, all the Heat need to do is come out of Boston with a win but already having lost the season series, the matchup will prove to be one of the toughest games of the season.

“The grit, the toughness to put yourself in a position like this. So it comes down to one game. Both teams have something to play for. It’ll be extremely competitive. No excuses. We’re on a back-to-back. Does not matter. We’re looking forward to the competition” Spoelstra said of the homecourt determining game.