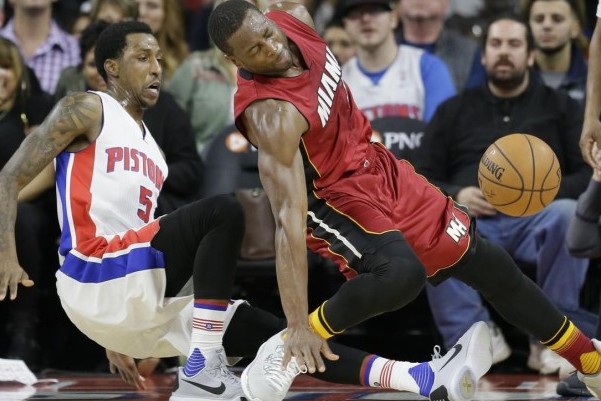 (Detroit, MI) – Following a 95-78 dismantling of the New York Knicks on Monday at American Airlines Arena, the Miami Heat (9-5) took a step backwards on the road Wednesday night with a 104-81 loss to the Detroit Pistons (8-7) at The Palace of Auburn Hills.

In a battle of two of the top centers in the NBA, Miami’s Hassan Whiteside and Detroit’s Andre Drummond, the Pistons’ big man had the edge tonight.

The former ninth overall pick in the 2012 NBA Draft out of the University of Connecticut was an absolute beast all night, as he recorded 18 points, a whopping 20 rebounds, five blocked shots and two steals. With another 20-rebound game, this is already the fourth time Drummond has accomplished the feat this season.

“People need to see guys making plays,” said Pistons head coach Stan Van Gundy. “It’s not what you say. It’s what you do on the court, that’s leadership.”

Whiteside, on the other hand, had a pretty good game himself with 15 points (7-of-9 from the field) to go along with 13 boards and three blocks.

For the Pistons, point guard Reggie Jackson propelled his way to 18 points (7-of-12 from the field, including 4-of-5 from three-point land), seven assists and four rebounds. Starting forwards Marcus Morris and Ersan Ilyasova also scored in double figures, scoring 14 and 13 points respectively.

“It’s a long season,” said Van Gundy. “You have ups and downs. You have to have resolve. You gotta have resilience.”

As a whole, it simply wasn’t a very good night for the Heat, who trailed the Pistons by as many as 28 points on separate occasions in the third and fourth quarters.

However, in his best game since opening night when he had 19 points against the Charlotte Hornets, Heat guard Gerald Green led the Heat in scoring with 16 points (6-of-17 from the field and 2-of-7 from beyond the arc) to go along with five boards. In just over 30 minutes of action, point guard Goran Dragic added 13 points and four assists of his own.

Up next after Thanksgiving, the Heat will remain on the road when they travel to Madison Square Garden to take on the New York Knicks (8-8) on Friday night. The contest, which is scheduled to tip off shortly after 7:30 pm ET, will be broadcast live locally on Fox Sports SUN.
[xyz-ihs snippet=”Responsive-Ad”]