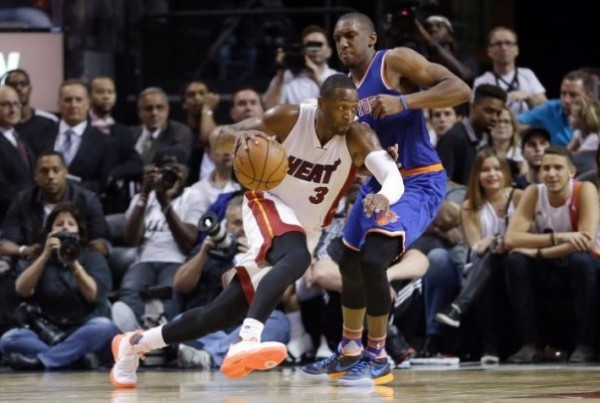 (Miami, FL) – After they fended off a hungry and winless Philadelphia 76ers team on Saturday evening, the Miami Heat (9-4) corralled the New York Knicks (8-7) by a score of 95-78 on Monday night at American Airlines Arena.

The early-season surprise Knicks, who were trying to extend a four-game winning streak, simply could not keep up with the Heat for most of the night as Miami concluded a successful seven-game homestand.

As it’s been all season so far for Miami, defense reigned supreme as the Heat forced the Knicks into missing 15 out of 16 shots during a stretch in the first half and went on a 36-8 run to distance themselves from the upstart New York squad.

Miami got contributions all across their roster, starting with 11-time and 10-time NBA All-Stars in Dwyane Wade and Chris Bosh respectively. The three-time champion Wade put forth 16 points, five assists and four rebounds while Bosh added 16 points, six boards and two steals of his own on the night.

For the Knicks, power forward Kristaps Porzingis continued to put together a strong campaign for NBA Rookie of the Year with 20 points (7-of-18 from the floor and 3-of-5 from beyond the arc), 14 boards and two blocked shots on the night. All-Star forward Carmelo Anthony, who is finally healthy again, led the Knicks with 21 points, eight rebounds, four assists and four steals while center Robin Lopez added 12 points and eight boards for New York.

Out of the nine players coach Spoelstra used in his rotation, eight scored at least seven points on Monday night with the exception of power forward Josh McRoberts, who too had a solid game off the bench with nine rebounds, two assists and two points.

“Well that’s what we’ve focused on since training camp started,” said Wade proudly. “We knew having a great shot blocker that as guards we had to do a better job and we knew we could be a better defensive team. Coach (Spoelstra) did a couple tweaks in what we’ve been doing, and this early part of the season has been working for us.”

Hassan Whiteside, who continues to rise to the top of elite center list of the NBA, contributed a double-double with 11 points, 11 boards and another five blocked shots on the season. Guard Tyler Johnson was a big factor off the bench for Miami, as he showed off his hops en route to 12 points, three rebounds, one steal and one block.

Up next, the Heat will finally hit the road again following their seven-game homestand when they play the Detroit Pistons (7-7) at The Palace of Auburn Hills. The matchup, which is scheduled to tip off shortly after 7:30 pm ET on Wednesday night, will be broadcast live locally on Fox Sports Sun.
[xyz-ihs snippet=”Responsive-Ad”]