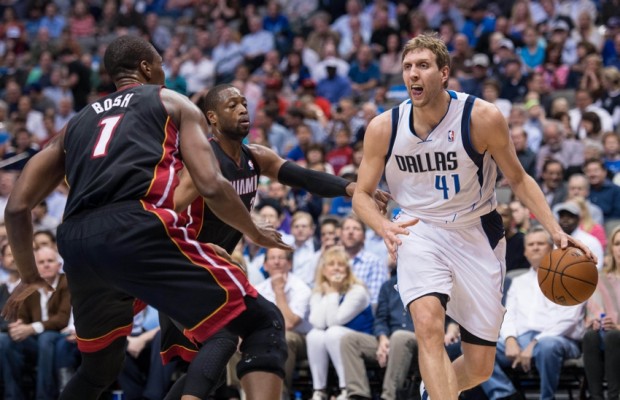 (Dallas, TX) — The Miami Heat (4-2) travel to Texas on Sunday night to take on the Dallas Mavericks (4-2) at the American Airlines Center.

Both teams are coming off of victories in their previous games. The Heat defeated the Minnesota Timberwolves, 102-92, on Saturday night. Dwyane Wade led Miami with 25 points and eight assists while Chris Bosh contributed 24 points.

Wade stated the following in regards to the leadership that both he and Bosh set for the rest of the team:

While the Heat won their fourth game of the season and held a double-digit lead over the T-Wolves from 7:07 remaining in the first quarter all the way until the midpoint of the fourth quarter, a 16-4 run by Minnesota cut the Heat’s lead to just 94-90 with under three minutes to go in the contest. Miami would eventually end the game on an 8-2 run to pull away from Minnesota.

The Mavs defeated the Utah Jazz on Friday night, 105-82, as Dirk Nowitzki continued his excellent start to the season with 27 points and 10 rebounds. Through the first six games of the season, the German has shot .543 from the field while averaging 21.2 points per game.

“Everybody better enjoy watching Dirk Nowitzki while he’s still playing, because there’s not going to be another one like him ever. This is a once-in-a-lifetime guy and he’s a total game-changer.”

Both teams enter this matchup with a record of 4-2. To make matters more interesting, both are teams regarded as top-tier within their respective conferences.

Although each of those respective series took place years ago, both franchises have holdovers from those Finals series–the Heat with Wade, Bosh, Mario Chalmers and Udonis Haslem, and the Mavs with Nowitzki, Tyson Chandler, J.J. Barea and Devin Harris.

From the 2004-05 season until the 2010-11 season, the Mavs won 14 straight regular season contests over their rivals from the Eastern Conference. However, the Heat have turned the tide by sweeping Dallas over the past three regular seasons.

If Miami hopes to knock off Dallas, they’ll have to improve in the rebounding department. The Timberwolves grabbed 49 boards in comparison to the Heat’s 40 rebounds despite Haslem’s season debut. It marked the third straight contest where Miami lost the rebound battle.

In UD’s debut after missing the first five games of the season due to a quad injury, he scored eight points and grabbed six rebounds in 14 minutes of action.

“I have a small soreness, but besides that I’m OK. I can compete at a high level without missing a beat and without being a step behind.”

Despite the veteran’s return to the Heat lineup, the team is still missing Chris Andersen (ribs) and Danny Granger (hamstring) due to injuries.

“That’s unfortunate timing. Hopefully it’s not too serious. We’re being proactive with it more than anything right now, so it doesn’t get worse.”

While the Heat may play yet another game without three of their front line players, the Mavs are also struggling in the rebounding department–they rank 26th in the league with 38.8 rebounds a game.

Another issue for the Mavs is the play of Chandler Parsons. The forward signed a $46 million deal with Dallas in the offseason, but he’s had a disappointing start to his career in Big D–he’s shooting just 42 percent from the field, capped off by a 1-for-11 performance in the Mavericks’ victory over the Jazz on Friday night.

Carlisle attributed Parsons’ struggles “to being sick.” Carlisle went into further detail in regards to Parsons:

“He’s not feeling good. He probably shouldn’t have played, but he wanted to. It was his best game defensively. Even though he didn’t shoot well, helping hold Gordon Hayward to 12 points was huge in this game.”

The Heat will look to win their fifth game of the season when they take on the Mavericks at 7:30 EST on Sun Sports.
[xyz-ihs snippet=”Responsive-Ad”]