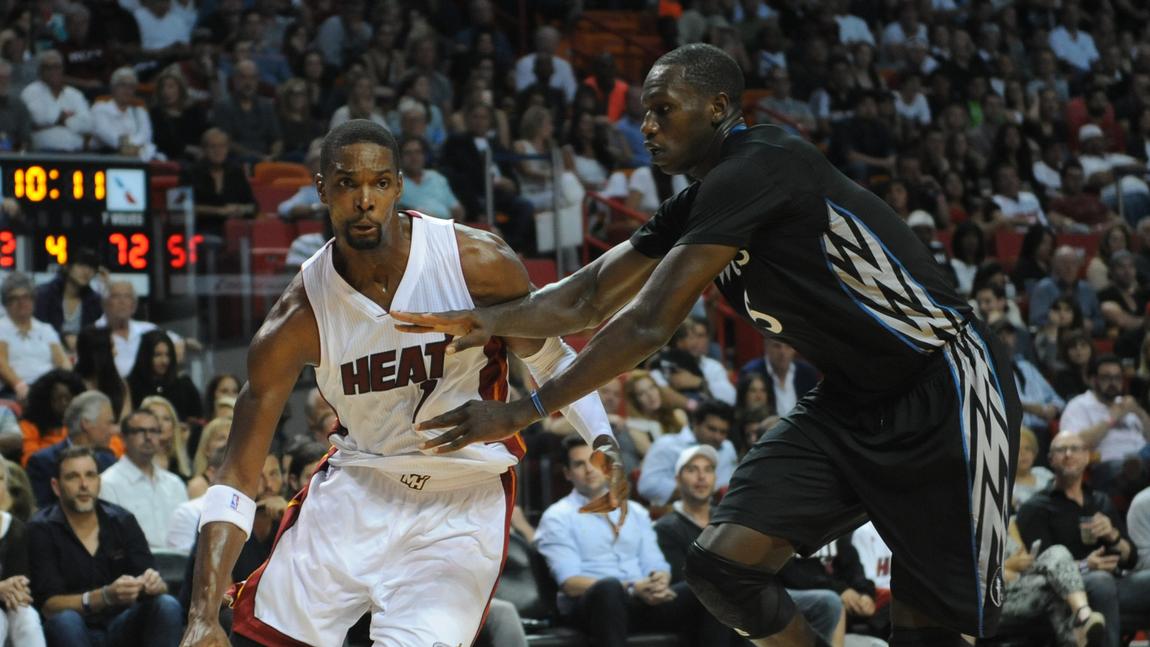 (Miami, FL) — The Miami Heat (4-2) defeated the Minnesota Timberwolves (2-4), 102-92, at the American Airlines Arena on Saturday night to end a two-game losing streak.

While the Heat won by 10 points, and led by double digits from the 7:07 mark of the first quarter until the 6:20 mark of the fourth quarter, Miami had to escape a late rally by Minnesota to win their fourth game of the season.

The Heat led 90-74 with a little over eight minutes remaining in the game before the Timberwolves went on a 16-4 run over the next four minutes to cut the deficit to 94-90. However, after Kevin Martin’s three-point shot cut the Heat’s lead to just four, Miami went on an 8-2 run to end the game.

Dwyane Wade led Miami with 25 points and eight assists on 11-of-16 shooting from the field. While Chris Bosh contributed 24 points and seven boards on 9-of-21 from the field. Wade and Bosh combined for 18 of the team’s 22 points in the final quarter.

Nikola Pekovic led the ‘Wolves with 19 points on 6-of-10 shooting with 11 rebounds. Thaddeus Young contributed 16 points with six rebounds, while the team’s leading scorer, Martin, failed to score a single point until there were six minutes remaining in the contest. He finished with eight points on 2-of-9 from the field.

While the victory was a nail-biter, the entire game was dominated by the Heat. Miami never trailed once during the matchup, and it was their first wire-to-wire win of the season.

The game’s best performances were by the Heat’s two stars, Wade and Bosh, but the victory marked the debut of fan favorite, Udonis Haslem. A quad injury prevented UD from playing in the first five games of the season, but he returned to the lineup when he entered for Bosh with 6:37 remaining in the first half. He scored on a reverse layup the first time he touched the ball, and finished with eight points and six rebounds in 14 minutes of playing time.

Haslem had the following to say in regards to his absence during the first five games of the season:

“It was disappointing [to miss the first five games] because I put a lot of work in this summer. I came in probably the best shape I’ve been in a long time. I had a conversation with (coach Erik Spoelstra)about a lot of things he needed me to do. I was ready to go out there and play.”

With the Heat already short on big men due to the injuries suffered by Chris Andersen (ribs), Danny Granger (hamstring) and Justin Hamilton (strained hip) in recent weeks, Haslem’s return was a much-needed one for the franchise.

Bosh echoed a positive sentiment in regards to his teammate’s return:

“It’s going to help out a lot. You can never have too much help down low, especially at that position. It’s good to have Udonis back not only in that sense, but to have somebody on that backside defense that knows what they are doing in the rotations. He’s somebody who can help be that linebacker that we always talk about, directing guys where they should be.”

However, while the return of the 11-year veteran was a nice sight, the Heat still struggled in the rebounding department versus the Timberwolves. Minnesota outrebounded Miami by a total of 49-40, and won the second-chance points battle by outscoring the Heat by 20.

Wade commented on the Heat winning despite their rebounding struggles in the postgame interview:

“We have a knack for finding a way to win. We have to do a better job. We can’t expect to win getting outrebounded, especially when we’re on the road.”

Though the Heat were bested on the glass and in second chance buckets, Miami outplayed Minnesota in every other category. In the absence of Ricky Rubio (severe sprained ankle), the ‘Wolves notched just 13 assists. The Heat as a unit assisted on 26 of their baskets, with Wade and Norris Cole alone, combining for 14 assists.

Lavine had just five points and four assists, while the 2014 No. 1 overall pick, Wiggins, struggled for most of the night on 3-of-9 shooting with 10 points.

Wade had a talk with Wiggins following the game, and had some advice for the young star:

“I told him never get discouraged. He’s got a lot of tools. If he wants to be great, he can be great. Just keep working on his game.”

While the Heat will enjoy their victory over the Timberwolves tonight, they’ll have to get ready for a trip to Dallas as they take on the Mavericks on Sunday night. Tipoff is set for 7:30 EST on Sun Sports.
[xyz-ihs snippet=”Responsive-Ad”]