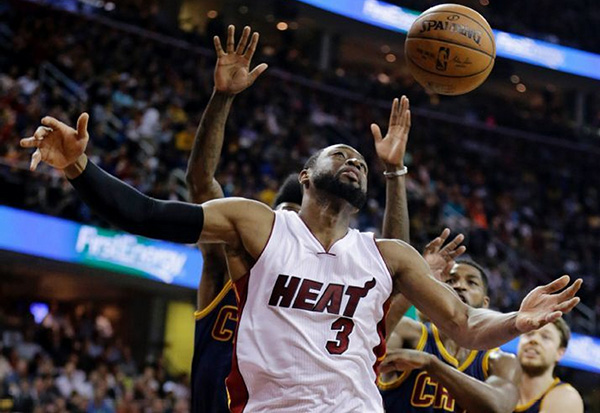 (Cleveland, OH) — On Thursday night at Quicken Loans Arena, the Miami Heat (34-41) had yet another run-in with the injury bug as they fell 114-88 to the second-seeded Cleveland Cavaliers (49-27) in blowout fashion.

As the Heat trailed the Cavs 49-31 with 6:45 remaining in the second quarter, Dwyane Wade (who had seven points and two rebounds in the first quarter alone) slipped on a wet spot and lost possession of the ball. At first glance, the awkward fall looked very cringeworthy.

Wade walked off the court under his own power but would not return, as he was officially diagnosed with a left knee bruise. This was the same knee that Wade had fluid drained out of last Saturday, when Wade promptly responded by dropping 40 in Miami’s 109-102 victory over the Detroit Pistons on Sunday.

“It could have been worse,” said the 11-time NBA All-Star after the game. “I knew I was in trouble on my way down. We will see when Saturday comes.”

“He bruised his knee,” said Spoelstra. “He slid awkwardly and banged it on the floor. He received ice and treatment throughout the second half. We’ll see how he feels when we get to Detroit.”

Cavs forward LeBron James and point guard Kyrie Irving were simply too much for Miami’s defense on Thursday night, as the pair scored a team-high 23 points a piece. James finished with eight rebounds, seven assists and three blocked shots, while Irving added five assists and four steals. On the night, James also made history as he passed Patrick Ewing for 20th on the NBA’s all-time scoring list.

Cleveland’s bench gave the Heat fits as well, with shooting guards Iman Shumpert and Matthew Dellavedova combining for 31 points. Shumpert (three of six from three-point range) had 17 points, four steals and three rebounds while Dellavedova (four of five from behind the arc) contributed 14 points, four assists and two steals.

Before tonight’s game tipped off, the seventh-seeded Heat were slated to face the second-seeded Cavs in the first round of the NBA playoffs. However, Miami now finds themselves in a tie with the Boston Celtics (34-41) for the eighth seed in the East, with the Charlotte Hornets (32-42) and Indiana Pacers (32-43) continuing to breathe down their necks for a playoff spot.

With only seven games remaining on their regular season schedule, the Heat will first travel to Michigan to take on the Detroit Pistons (29-46) on Saturday night. The contest, which will take place at The Palace of Auburn Hills, is slated to tip off shortly after 7:30 pm ET.
[xyz-ihs snippet=”Responsive-ImagenText”]