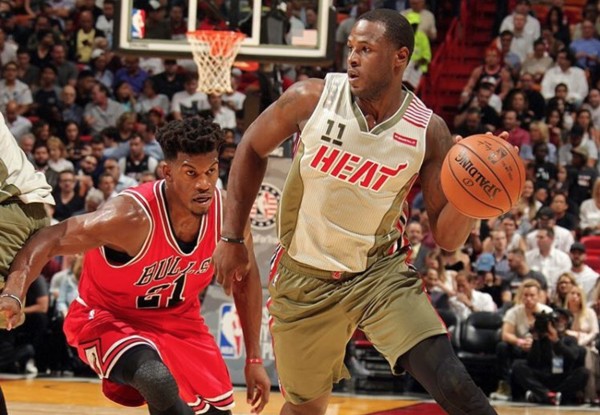 In his first trip to Miami in a Bulls uniform after spending 13 legendary seasons with the Heat, shooting guard Dwyane Wade hit two clutch free throws in the closing seconds of the fourth quarter to seal a win for Chicago in a back-and-forth contest against his former team.

“Weird game, man. One of the weirdest games I’ve ever played in. I’m glad it’s over. Most importantly, I’m just glad we got a win,” said Wade immediately following the contest.

Wade, who finished with 13 points (5-of-17 from the field in 32 minutes of action), seven rebounds and four assists, got a standing ovation before the game from Heat fans.

“I don’t even know if I want to watch the tribute. I don’t get emotional about anything except these kind of things,” said Heat head coach Erik Spoelstra before the game.

Rising star Heat center Hassan Whiteside had his sixth double-double in only seven games in yet another dominant effort with 20 points on 8-of-18 shooting, a whopping 20 rebounds and three blocked shots on the night.

Heat shooting guard Josh Richardson and small forward Justise Winslow, who had 16 and 15 points respectively on the night, really impressed Wade with their performances, especially down the stretch in the fourth quarter.

“They got me, I love going against my young guys, man,” Wade said with a laugh. “Me and Winslow, doing what we used to do in practice, just go at it. It was good to go against those guys. I love to see them progressing. They’re a young team right now, but if they continue this the way that they’re going, those guys are going to be good. They play hard and all they need to do is continue playing, they’re going to be good players in this league and I’m proud of them.”

The Bulls had four starters and two reserves score in double figures on the night, as they were led by All-Star small forward Jimmy Butler’s 20 points, five assists, four boards and three steals.

Chicago point guard Rajon Rondo and center Robin Lopez each had 16 points apiece, while forwards Doug McDermott and Nikola Mirotic came off the bench to score 13 and 10 points respectively.

Up next, the Heat will try to get back on track when they host the Utah Jazz (5-4) at American Airlines Arena on Saturday night. The contest, which is scheduled to tip off shortly after 8:00 p.m. ET, will be broadcast locally on Fox Sports Sun.
[xyz-ihs snippet=”Responsive-ImagenText”]