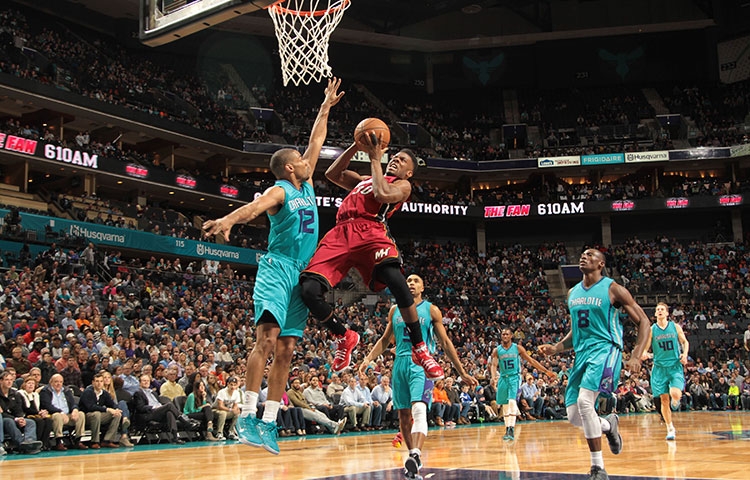 In a defensive struggle of a game, Miami trailed Charlotte for most of the night. The Hornets led the Heat from midway through the first quarter until Mario Chalmers’ three-pointer with 3:37 remaining in the game gave Miami their first lead, 74-72, in three full quarters.

Unfortunately for the Heat, they would convert on just one more field goal for the rest of the game. Despite stifling defense that prevented the Hornets from making a field goal in the last seven minutes of the contest, Charlotte went to the free throw line and nailed 7-of-12 free throw attempts in the closing minutes to seal the game.

After Kemba Walker went to the free throw line and converted on 1-of-2 attempts from the charity stripe with 12.1 seconds remaining, Chris Bosh airballed a three-point attempt from the top of the arc. Chalmers gathered the offensive rebound, dribbled to the left corner and clanked the game-winning three-pointer off the rim to seal Miami’s fate.

Erik Spoelstra described the play in the final sequence of the game:

“It was just a two-man action between Dwyane and CB. CB had a decent look at it, he was open on the flare. I think on the catch they closed out pretty hard and got a good contest and ‘Rio had a chance to make a play, but we came up short.”

The loss means that the Heat stand just a half-game ahead of the Hornets for the seventh spot in the Eastern Conference. It was the eighth victory in the past nine games for Charlotte.

After a promising five-game road trip out west which saw the Heat win the rebounding battle in four of five games played, Miami came back down to earth in Charlotte—the Hornets grabbed 20 offensive rebounds, which tied the mark for most by a Heat opponent this season. Making matters worse, Charlotte outrebounded Miami 56-41 overall in the game.

Bosh didn’t seem content taking away moral victories from yet another close loss as the Heat dropped six games below .500:

“I’m tired of it. You can always take something from everything. But at the end of the day we lost. That’s what it is. All of these moral victories we can put that on the shelf. You either win the game or you lose the game.”

The Heat looked lost on the glass and clearly missed the presence of Hassan Whiteside. Whiteside missed the game due to a right ankle sprain he suffered the night before in the loss to the Oklahoma City Thunder. Chris Andersen started in his place at center.

Also missing from the starting lineup was Luol Deng who had been battling an illness over the past several days. Though he played versus the Thunder, he was ruled out before Wednesday’s game versus Charlotte. Danny Granger made his third start of the season at small forward.

The Heat shot a season-low 35 percent from the field, but had its best defensive effort of the season, as the Hornets converted on just 34 percent of their field goal attempts.

Just about every player on the court struggled from the field, as Dwyane Wade scored 17 points on just 8-of-21 shooting. Bosh also posted 17 points, but did it on 7-of-20 shooting, including going 1-of-6 from beyond the arc.

Bosh commented on his missed attempt to win the game at the end of the fourth quarter:

“I rushed it. I wasn’t on balance. You’ve gotta find a way between not taking a quick shot and rushing but getting the shot off quick and getting your feet under you and I didn’t have my feet under me. I rushed the shot and it was a bad miss.”

The Hornets were paced by Walker, as the point guard scored 15 points on 4-of-17 from the field. Al Jefferson had 12 points, four rebounds and two blocks in the winning cause.

The Heat will have one day off before returning home to host the Indiana Pacers on Friday night. It will be the teams’ third meeting of the season, with Miami having lost to Indiana in both of the previous contests. Tip-off is set for 7:30 pm EST and the game will be broadcast on Sun Sports.
[xyz-ihs snippet=”Responsive-ImagenText”]