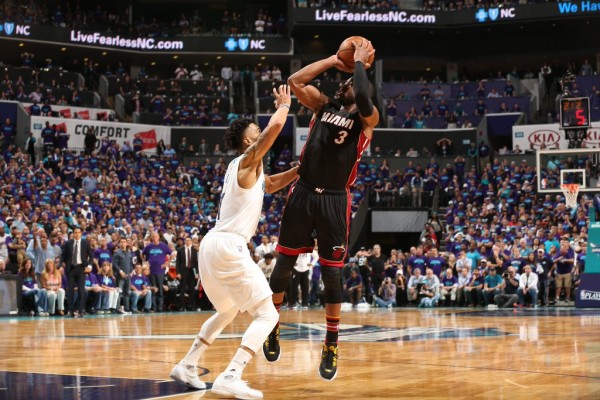 (Charlotte, NC) – With the possibility of elimination staring them square in the face, the Miami Heat (3-3) put together a stellar performance down the stretch in their season-saving 97-90 victory over the Charlotte Hornets (3-3) in Game 6 on Friday night at Time Warner Cable Arena.

All-Star shooting guard Dwyane Wade was incredible in the closing minutes of the fourth quarter, as he nailed a pair of clutch shots and blocked Hornets point guard Kemba Walker’s layup from behind with 14.8 seconds left to seal the win.

“I play for these moments,” Wade said. “It’s what makes you feel alive, and Game 7 is the best feeling to be a part of.”

“Nothing will be given, playing a great team on the side,” said Heat head coach Erik Spoelstra after the game. “Dwayne feels most alive in games like this.”

Wade, who hit two three-pointers in the fourth quarter for his first threes made since December, finished the game with a team-high 23 points (10-of-20 from the field), six rebounds, four assists, three blocks and two steals.

“The guy is one of the great players of our time,” said Hornets head coach Steve Clifford on Wade’s performance. “He’s made big play after big play.”

Despite a 90-81 lead for the Heat with just over three minutes to play, Walker refused to let the Hornets go down quietly and cut the deficit to two points with 1:40 remaining. The Charlotte point guard was a one-man wrecking crew, as he went off for a game-high 37 points (14-of-30 from the floor), five assists, three rebounds and two steals.

“It’s do or die. Both teams want to advance,” Walker said. “It’s going to be a battle, a war, just like this whole series.”

Small forward Luol Deng, who is averaging 19.7 points per game in the series, was extremely efficient on Friday with 20 points (9-of-14 from the field and 4-of-5 from three-point range), four boards and two steals. Point guard Goran Dragic contributed 14 points and seven rebounds, while center Hassan Whiteside added 12 points, seven rebounds and four blocked shots.

For the Hornets, center Al Jefferson had a solid night with 18 points and nine boards, while center Cody Zeller came off the bench to score 12 points on 4-of-5 shooting.

Up next, the Heat will be return to Miami for a pivotal Game 7 at American Airlines Arena. The contest, which is scheduled to tip off shortly after 1:00 pm ET on Sunday afternoon, will be broadcast nationally on ABC.
[xyz-ihs snippet=”Responsive-Ad”]