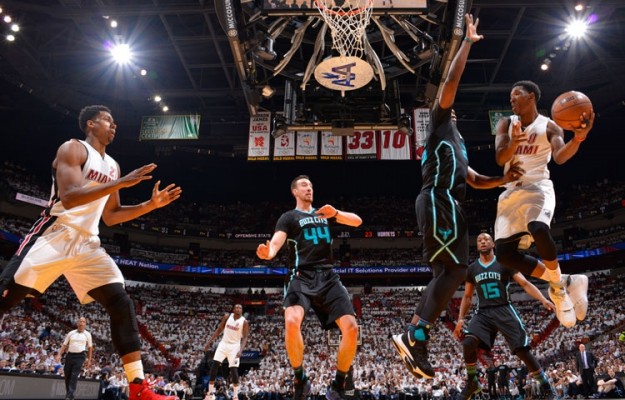 (Miami, FL) — With just five ticks remaining and the Miami Heat down, 90-88, in a pivotal Game 5 against the Charlotte Hornets, Dwyane Wade went up, drew contact, but nothing was called.

On the play, Cody Zeller of the Charlotte Hornets had appeared to make contact with Wade’s body down low, but the referees simply swallowed their whistle.

Then with 2.6 seconds remaining and Charlotte inbounding the ball, forward Luol Deng tried to quickly foul Zeller, but again no call was made.

“Look, it never is decided by those plays, but from my vantage point Dwyane certainly looked like he got fouled.”

That’s certainly what 19,685 in attendance thought happened on that last Heat possession and it seems like calls against the Heat are growing ever so noticeable these last couple games.

“There’s no reason for me to look at it,” Wade said. “It ain’t going to change anything. I thought I did. It wasn’t called.”

Wade finished with a game-high 25 points to go along with five rebounds and four assists, while Deng ended the evening with 16 points, six rebounds, and three assists.

The Heat return to Charlotte on Friday as they get prepared to take on the Hornets in a pivotal do-or-die Game 6.
[xyz-ihs snippet=”Responsive-Ad”]