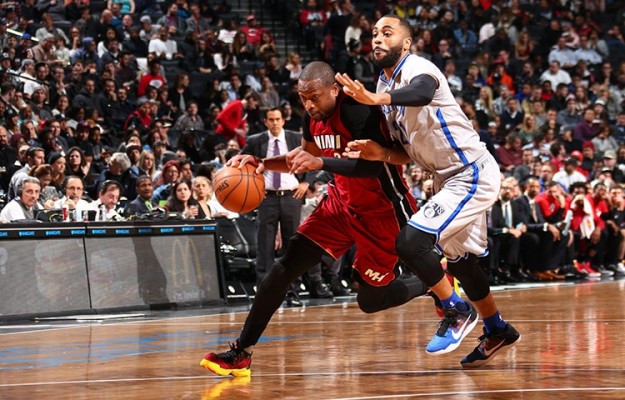 (Brooklyn, NY) – He’s too old, they said. He’s washed up, they said. Dwyane Wade himself? He wasn’t buying any of that nonsense on a night where he passed Clifford Robinson for 43rd place on the NBA all-time scoring list.

For the second night in a row following Monday night’s 89-84 victory over the Chicago Bulls, Wade and the Miami Heat (25-21) took over the fourth quarter to secure a 102-98 win over the Brooklyn Nets (12-34) at Barclays Center.

“You love this game, and whenever you’re able to play this game like that with guys like C.B., guys that you love, and you’re able to come out here and be your best it’s great,” said Wade after the game.

The 12-time All-Star and three-time NBA champion went off when it mattered most down the stretch, as the 34-year-old shooting guard scored 11 of his 27 points in the final five minutes of Tuesday night’s game.

“Next time we step on a court, we need to be better than we were tonight,” said Wade. “We really ground this game out and there was a lot of grit shown by this team.”

Wade, who had 10 points during the final frame against Chicago, also finished with eight assists, four rebounds, three steals and two blocked shots against Brooklyn.

The crowd at Barclays Center was brought to their feet late in the fourth quarter after Wade fooled Nets shooting guard Wayne Ellington with a nasty crossover, followed promptly by a slick fadeaway jumper over center Brook Lopez.

Even without starting center Hassan Whiteside and starting point guard Goran Dragic, the Heat found a way to rebound from an early 10-point deficit and hold off the lowly Nets in the second half.

Power forward Chris Bosh also had 27 points (12-of-18 from the field) of his own to go along with five rebounds and four assists, while rookie small forward Justise Winslow came off the bench to contribute 13 points and seven boards.

The defense really stepped up for Miami after halftime, as they held Brooklyn to 41 points in the final 24 minutes after giving up 57 in the first half.

“On the road tonight we have to have the same defensive effort and disposition as last night,” said Heat head coach Erik Spoelstra before the game.

Despite three-pointers from Ellington and Johnson that cut Miami’s lead to 90-89 with 3:35 left in the game, Brooklyn was never able to retake the lead.

Up next, the Heat will conclude their five-game road trip when they take on the Milwaukee Bucks (20-27) on Friday night at Bradley Center. The contest, which is scheduled to tip off shortly after 8:00 pm ET, will be broadcast live locally on Fox Sports SUN.
[xyz-ihs snippet=”Responsive-Ad”]