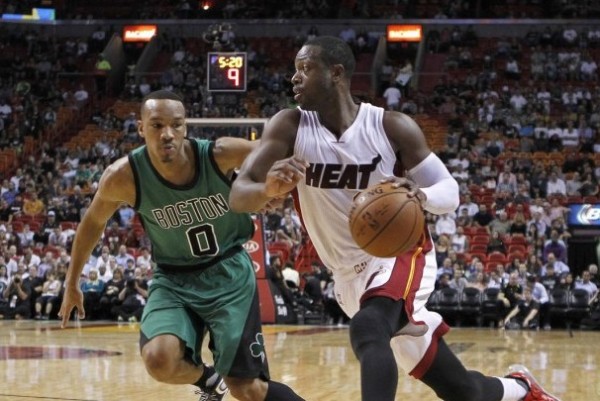 (Miami, FL) – Following a second drubbing in a span of five days of the New York Knicks on Friday night, the Miami Heat (10-6) returned home against the Boston Celtics (10-8) and fell by a score of 105-95 on Monday night at American Airlines Arena.

After trailing by as many as 14 points with 7:20 left in the third quarter, the Heat stormed back to cut the Celtics lead to one point on separate occasions in the final frame. However, after Miami got to within an 84-83 deficit, Boston responded in a big way with 10 straight points and refused to let the Heat take the lead back.

With his team maintaining a 99-93 lead and only 57 seconds left in the fourth quarter, Celtics shooting guard Evan Turner (13 points, six rebounds, three assists and three steals off the bench) shut the door on the Heat when he grabbed his own offensive rebound, killed some clock and cut to the hoop for a game-sealing layup.

“The one thing is they’re very guard-dominant, especially defensively the way they can get up in you,” said Heat shooting guard Dwyane Wade. “But also the way they move the ball. They’re a team similar to how a lot of teams are trying to play.”

Despite a season-high in points and steals from Wade (30 points, five steals, three assists and three rebounds), the Heat struggled mightily in terms of ball security as they racked up 19 turnovers as a team. Unfortunately, Wade was responsible for six of those turnovers on the night.

“We’ll get better with that,” said Heat head coach Erik Spoelstra after the game on his team’s offense. “Trust. Moving the ball. We just need more time.”

Power forward Chris Bosh, who played through an illness, racked up a double-double with 21 points (8-of-17 from the field), 10 boards and five assists. However, there wasn’t much help elsewhere from the Heat as guard Tyler Johnson was the only other player on the team to score in double figures with 10 points. Guards Goran Dragic and Gerald Green, both in the starting lineup for Miami, each finished with nine points on the night.

“We’re still a new team,” said Bosh. “There’s only so much longer we can use that excuse.”

In a superb all-around team effort from head coach Brad Stevens’ Celtics squad, all five starters scored in double figures as they were led by guard Avery Bradley’s 25 points (9-of-15 from the floor), three assists and three steals. Small forward Jared Sullinger was second in scoring for Boston with 17 points, six rebounds and three steals, while power forward Amir Johnson had a double-double with 13 points, 10 boards and two blocked shots.

Isaiah Thomas, another one of Boston’s talented guards, finished with 16 points and a game-high nine assists. For Miami, small forward Luol Deng missed his third consecutive game on Monday night with a sore left hamstring.

Up next, the Heat will play the second of their four-game homestand on Thursday night when they host the Oklahoma City Thunder (11-7) at American Airlines Arena. The contest, which is scheduled to tip off shortly after 7:00 pm ET, will be broadcast nationally on TNT.
[xyz-ihs snippet=”Responsive-Ad”]