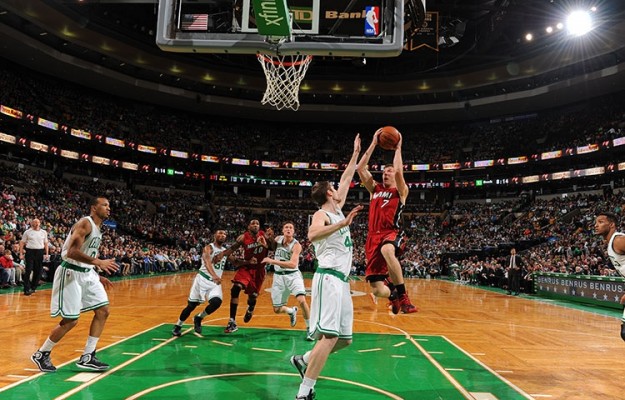 (Boston, MA) — For the second night in a row, the Miami Heat (33-38) had a big lead in the second half of an important game. Deja vu? Nope, not tonight for the very shorthanded Heat squad, as they held on in the fourth quarter en route to a 93-86 victory over the Boston Celtics (31-40) on Wednesday night at the TD Garden.

After Tuesday night’s utter collapse in an 89-88 loss to the Milwaukee Bucks, the Heat came close to blowing it yet again to the Celtics. As Miami led the game 82-62 at the end of the third quarter, they began to fall apart again as Boston cut their lead down to five points late in the fourth. Twice in as many days, the Heat have combined to score a dismal 20 total points in the final 12 minutes of their previous two contests.

“This game was very important for us, especially after last game was a similar situation,” said Goran Dragic after the game. “Today was basically the same story, and I’m very glad we won that game.”

On a night where Dwyane Wade (knee), Hassan Whiteside (hand), Chris Bosh (season-ending blood clots) and Chris Andersen (calf) did not play due to injuries, Dragic led the way for the Heat with 22 points, seven assists and five rebounds.

“I’m proud of my teammates on the whole team, especially with Hassan out with an injury and Dwyane is out,” said Dragic. “The bench guys really stepped in, and that’s the quality of our team that everyone can play. That’s the beauty of basketball too, and I think when we get everybody healthy it’s going to be really tough to beat us. We demonstrate that we don’t look for excuses, and who we’ve got on the bench, we’re going to play with those guys.”

A pleasant surprise for the Heat tonight was Udonis Haslem being able to step up to play his best game of the season. The longest-tenured player on the Heat roster with 12 years of experience and three-time NBA champion recorded his first double-double of the season as he contributed 12 points, 12 rebounds and three steals in 38 minutes of action.

“This is a huge, huge win for us,” said the veteran Haslem. “Going in undermanned, I’m very proud of how our team responded. (It’s) funny how this game works.”

Henry Walker was put in the starting lineup on Tuesday night and drained four huge three pointers on his way to 12 points. Luol Deng added 15 points and five rebounds for Miami, while rookie Tyler Johnson came off the bench to contribute 12 points, four rebounds and two steals on the night.

Boston almost duplicated the heartbreak that Milwaukee delivered to Miami last night, as the Celtics were unable to leapfrog the Heat into the seventh seed in the Eastern Conference playoff race.

Off the bench, small forward Jae Crowder led the Celtics in scoring as he put up 16 points as well as seven rebounds. Point guard Phil Pressey scored nine of his 11 total points in the fourth quarter, while center Tyler Zeller (10 points and eight rebounds) and point guard Avery Bradley (12 points) scored in double figures as well.

Up next on their schedule, the Heat will travel to play the top-seeded Atlanta Hawks (54-17) on Friday night. The game is slated to tip off shortly after 7:30 pm ET at Philips Arena.
[xyz-ihs snippet=”Responsive-ImagenText”]