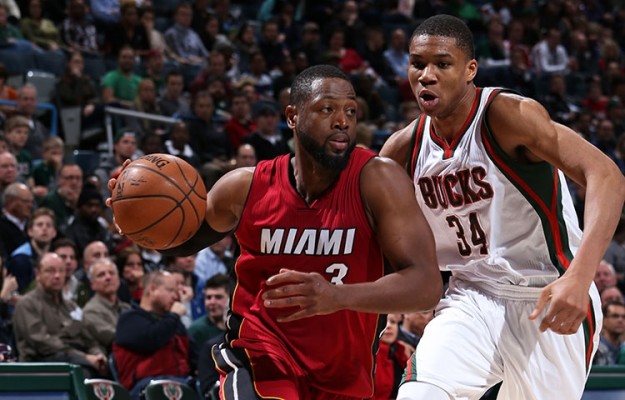 (Milwaukee, WI) — In what would have propelled them even closer to the sixth seed in the Eastern Conference, the Miami Heat (32-38) completely fell apart down the stretch in a stunning 89-88 defeat at the hands of the Milwaukee Bucks (35-36) on Tuesday night at BMO Harris Bradley Center.

Bucks small forward Khris Middleton, who had shot one of seven from three point range until the final possession, delivered the dagger to Miami’s heart as he swished a trey at the buzzer.

“It was pretty crazy,” said Middleton about the end of the game. “It got intense, we got into it and got the stops that we needed to give us a chance at the end. All these other teams behind us are fighting to catch up with us and we’re trying to stay ahead. It’s going to be very intense from here on out.”

While Middleton finished the night with 13 points and four rebounds, the Heat put together an utterly disastrous fourth quarter to account for their one-point loss. Milwaukee Bucks head coach Jason Kidd and his squad took full advantage of Miami’s misfortunes.

“Those guys in that locker room get a lot of credit for staying together and playing the game out,” said Coach Kidd after his team’s victory. “They found a way to get the last shot and it went in.”

After they built up an 81-65 lead over the Bucks with 9:52 remaining in the final frame, Miami choked the game away when they managed to score only nine points in the quarter.

“Thank God we play tomorrow,” said Miami Heat head coach Erik Spoelstra after the loss. “It’s disappointing that we weren’t able to execute to give ourselves a chance. Sometimes momentum turns in a game like that. Things start to avalanche from there.”

However, Spoelstra is confident in his team going forward and will rally his players together to right the ship.

“We’ve shown with this group we can bounce back after tough losses,” added coach Spoelstra.

If this loss didn’t already sting enough for the Heat, their injury woes continued during the second quarter. While attempting to block a shot, Hassan Whiteside lacerated his right hand on the rim, which left a huge gash in between two of his fingers.

After he was taken to the locker room, his cut required 10 stitches on his shooting hand and his status going forward remains questionable. This was a huge blow for Whiteside, as the up-and-coming star center compiled seven points, eight rebounds and two blocks in just 12 minutes on the floor.

Dwyane Wade, who was named the Eastern Conference Player of the Week for his efforts from March 16th through March 22nd, led the way in scoring for the Heat with 21 points to go along with four assists and three steals. Goran Dragic had a solid outing with 16 points and six assists, while Luol Deng contributed 13 points and four rebounds of his own. Off the bench, Mario Chalmers had 14 points and three steals on Tuesday night.

For the Bucks, they had five players score in double figures, which included three players having recorded a double-double. Ersan Ilyasova (19 points, 11 rebounds and three blocks) was the leading scorer for Milwaukee, while Giannis Antetokounmpo (16 points, 10 rebounds and three blocks) and Zaza Pachulia (14 points, 11 rebounds, seven assists and five blocks) also recorded double-doubles for the Bucks.

Up next on their slate, the Heat will look to rebound on Wednesday night when they take on the Boston Celtics (31-39) in a battle for playoff positioning. The game, which will be played at TD Garden, is scheduled to tip off shortly after 7:30 pm ET.
[xyz-ihs snippet=”Responsive-ImagenText”]