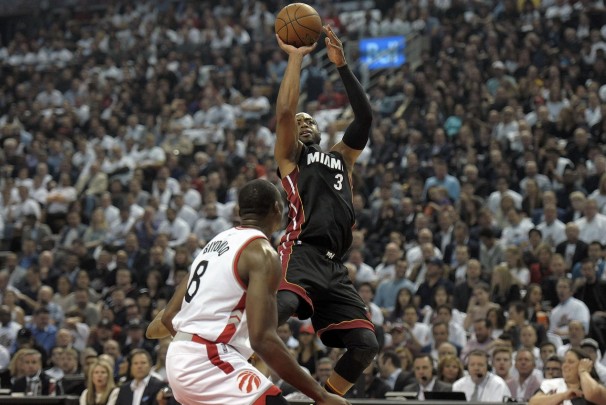 (Toronto, ON) – Despite nearly coming back from a 20-point deficit, the Miami Heat now find themselves on the brink of elimination after falling 99-91 to the Toronto Raptors at Air Canada Centre on Wednesday night.

Holding the ball in a one-possession game, Miami then missed a golden opportunity to perhaps tie the game when Goran Dragic committed a turnover with 1:15 remaining. Five unanswered Raptor points offered enough of a cushion to hold off Miami.

“Neither team plays like this during the regular season,” Heat head coach Erik Spoelstra said during the postgame press conference. “Inevitably, it comes down to a few possessions down the stretch and they made some plays.”

The Heat forged their ill-fated comeback even with Luol Deng forced to the bench in the first half after trying to brace himself during a fall on the court. Deng injured his wrist, which resulted in swelling. His status for Game 6 won’t be known until he undergoes an MRI on Thursday.

“We have to get ready for Game 6,” Wade said. “Hopefully, Luol is ready. If not, the next guy has to step up.”

Unless prevented by team doctors from playing, Deng says he plans on playing:

“As long as there’s nothing medically serious, I’ll play,” Deng commented. “I just have to know what it is.”

Spoelstra didn’t seem to be too concerned with the lack of bodies heading into Game 6:

Miami’s biggest problem on the evening was the Toronto backcourt of DeMar DeRozan (34) and Kyle Lowry (25), which combined for 59 points.

In the first six minutes of the game, the Raptors jumped out to a 17-4 advantage and eventually led 26-10 with just over two minutes remaining in the period. The Heat closed the quarter with an 8-2 run to cut their deficit to 10 at 28-18.

The major reason for the first quarter struggles of Miami was the 27 percent (6-of-22) effort on shot attempts, which jumped up considerably to 61 percent (11-of-18) in the second period.

“That (DeRozan and Lowry) wasn’t what beat us tonight,” Wade commented in postgame remarks. “Getting down big early hurt us.”

On Friday night, one team will either start their offseason or the two teams will head back to Toronto for a climactic Game 7 on Sunday.
[xyz-ihs snippet=”Responsive-Ad”]