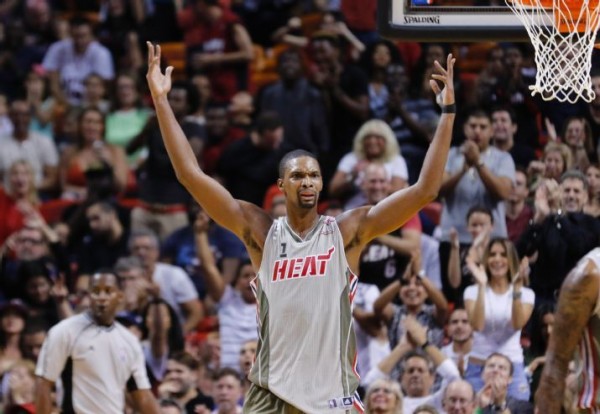 (Miami, FL) – Following a tough 90-87 road loss to the Indiana Pacers on Friday night, the Miami Heat (4-3) flexed their muscle on defense in the second half as they cruised to a 96-76 victory over the Toronto Raptors (5-2) on Sunday night at American Airlines Arena.

Facing a 47-44 deficit heading into the half, Heat power forward and captain Udonis Haslem went on another one of his rants in the locker room for his teammates to hear, and what he said was enough to get Miami quite fired up for the second half of the game.

“I gotta give, once again, credit to Udonis Haslem,” said Heat power forward Chris Bosh after the win. “He’s on us, man. He’s in a zone this year. He did an incredible job as a leader. He was really getting on us because he didn’t like what he was seeing out there as far as effort is concerned.”

The Heat managed to hold the Raptors to a combined 29 points the entire second half, as many guys on Miami’s roster stepped up to play great defense. Most notable was the play of rookie small forward Justise Winslow (nine points, five rebounds and one steal off the bench), who played excellent defense on All-Star shooting guard DeMar DeRozan of the Raptors by holding him to just 5-of-14 shooting (16 points and three assists) to go along with six turnovers.

“I’ve never seen anything like it as long as I’ve been in this league,” said an impressed Bosh on Winslow’s composure and defense as a rookie.

For Miami, the Bosh led all scorers with 23 points (8-of-14 shots made from the floor and 4-of-7 from beyond the arc) and eight rebounds, while standout center Hassan Whiteside had a monster game with 20 points (8-of-15 from the field and 4-of-5 from the charity stripe) to go along with 11 boards and a whopping six blocked shots.

Dwyane Wade also had 12 points and three rebounds for the Heat, while Tyler Johnson scored in double figures off the bench with 10 points. Reserve Mario Chalmers had a very productive night for the Heat as well, scoring nine points, nabbing seven rebounds and dishing out six assists.

Leading the Raptors in scoring was center Jonas Valanciunas with 17 points (8-of-12 from the floor) and five rebounds, while point guard Kyle Lowry had quite a solid night with 15 points, eight assists and six boards.

Up next, the Heat will host the Los Angeles Lakers (1-5) in the second game of their seven-game home on Tuesday night at AmericanAirlines Arena. The matchup, which is scheduled to tip off shortly after 7:30 pm ET, will be broadcast on Fox Sports SUN.
[xyz-ihs snippet=”Responsive-Ad”]