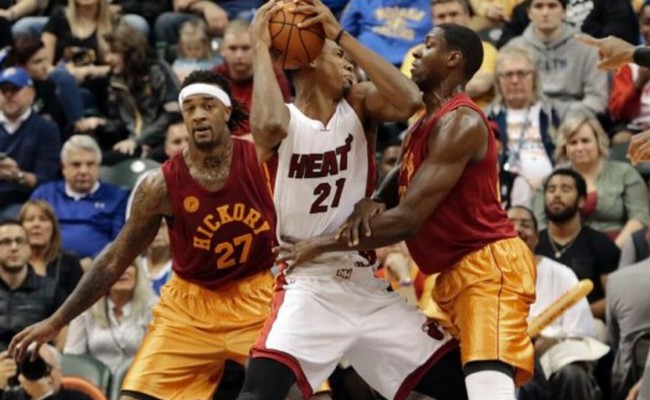 Paul George had his best game in nearly two years, while the Heat struggled to close out the Pacers after leading the game by as many as 13 points in the first half. George scored 36 points on the night, including 21 points in the second half. It was the most points the Pacers swingman had scored in a game since March 15th, 2014.

Dwyane Wade struggled on the night as he scored a season-low nine points. Wade had a chance to tie the game with time expiring on a fadeaway three-pointer from the left corner but shot an airball instead. The veteran went 0-of-8 from the field in the second half and failed to score any points in the third and fourth quarters.

Chris Bosh led the Heat with 21 points and 11 rebounds, while Justise Winslow had the best game of his young career in posting 13 points and eight boards.

In regards to George’s dominant performance, Bosh had nothing but positive things to say for the opposing forward:

“He played fantastic ball tonight. He put his team on his back. He was making it tough. He’s a physical, long guard. When he had mismatches he went down to the post and capitalized. He played amazing off the screen and roll, got his team involved and of course, put the ball in the basket. He looks like he’s back to being himself.”

Miami’s starters struggled offensively a night after each of them scored in double digits versus the Minnesota Timberwolves. Wade, Luol Deng and Hassan Whiteside all scored in single digits.

The game was tied at 49-all entering halftime and remained close throughout. At the end of three quarters, the Pacers led just 71-68. The bout was decided late in the fourth when Indiana grabbed a couple of key offensive rebounds and George was able to knock in two long-range jumpers that gave the Pacers an 84-80 lead with three-and-a-half minutes remaining.

With the Pacers leading 86-84 with just 39 seconds remaining, George missed a three-point shot attempt. Jordan Hill would end up tipping in the missed attempt to put Indiana up 88-84 with 34 ticks left.

Following a Tyler Johnson layup and 1-of-2 shooting from the free-throw line by Pacers guard Glenn Robinson, the Heat trailed just 89-86 with less than seven seconds remaining. Wade made an inbounds pass to Johnson where the second-year guard was fouled with less than five seconds left in the game. The young guard wound up hitting just 1-of-2 free throws attempts to cut the deficit to 89-87.

George would get fouled with 4.1 seconds remaining and converted on 1-of-2 free throws to give Indiana its final point of the game before Wade missed the game-tying three-point attempt at the end.

Following his miss, Wade was seen arguing with the refs as he believed he was fouled on the shot attempt. Head coach Erik Spoelstra commented on the conclusion of the game:

“It doesn’t matter. It wasn’t called. We had enough opportunities to make plays down the stretch and we didn’t.”

Josh McRoberts displayed some of his passing skills as he had eight points and five assists in 15 minutes of playing time. Outside of George, Jordan and George Hill were the other Pacers to score in double figures, notching 12 and 10 points respectively.

The Heat will travel back home for a seven-game homestand which will begin on Sunday night versus the Toronto Raptors. It will be the longest home stretch of the season for Miami.

Spoelstra was asked if the upcoming home stretch is a good time for the Heat to gain some momentum:

“The time is always now. The time was tonight and the time will be on Sunday. That’s all I’m thinking about is getting out of here as quickly as we can, getting our rest and getting ready for a big one in our building to kick that thing off.”

Tip-off is set for 6 p.m. EST and the game will be broadcast on Sun Sports.
[xyz-ihs snippet=”Responsive-Ad”]