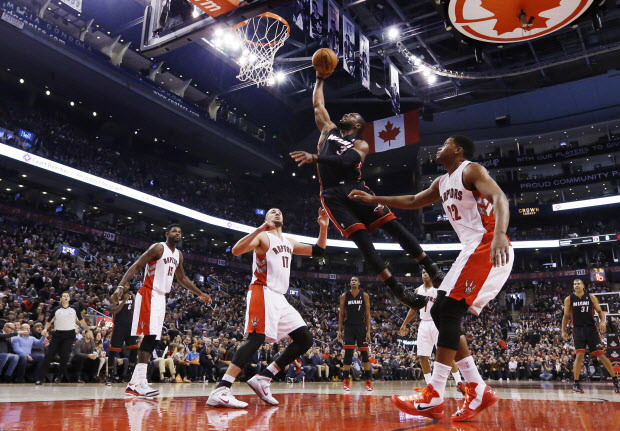 Looking to continue their hot start, and fresh off a win on coach Erik Spoelstra’s birthday, Miami will face their first back-end of a back-to-back. Dwyane Wade dished out 10 assists against the Sixers on Saturday, but will look to rebound after a poor shooting night, going 4-18 from the field. Chris Bosh and Norris Cole submitted impressive performances, combining for 50 points and 10 rebounds on only three turnovers.

“You have a guy like [Chalmers] step up tonight and score 18,” Wade said after Saturday’s game against the 76ers. (Note: Chalmers scored 20 points, not 18.) “The other night it was Norris. So everybody’s getting opportunities, it’s just a little different than we’ve had.”

The Raptors will present a unique challenge for the Heat on Sunday with their incredibly diverse attack. In their opening night win against Atlanta, Toronto had two players with double-digit rebounding numbers and seven players with double figures in scoring. Against Orlando on Saturday, Lowry and DeRozan went for 21 and 26 points, respectively. Amir Johnson, Jonas Valanciunas, and Terrence Ross were also in double figures.

“They’ve got a good team,” Wade acknowledged. “They’re aggressive as well going to the basket. It’ll be a challenge.”

Cole echoed his teammates’ thoughts after Saturday’s game. “[Toronto point guard Kyle Lowry] is definitely one of the top point guards in the Eastern conference. I’m looking forward to battling [him].”

Miami should certainly be pleased with how they started the season. Two double-digit wins is impressive against any NBA team, and especially when one of those teams is the Washington Wizards. Nonetheless, Wade did not shy away from critiquing his team’s performance.

“At this point in the season, it’s so early. We know we have so much to get better at. It’s good to see that the things that we’ve been working on have shown on the floor,” he articulated. “The challenge is to see if we can do it tomorrow with our first back-to-back of the season.”

Bosh has been electrifying in his first two games, posting an average of 28 points over that span. Already undoubtedly a top-25 player in the NBA, Bosh has thus far capitalized with his increased opportunities. His usage rate has skyrocketed from his first three years in Miami, where he averaged 23.1% to (the two games this year averaging) 29.5%. To put that in perspective, only four players averaged higher than 29.5% in the 2013-14 NBA season: Russell Westbrook, Kevin Durant, DeMarcus Cousins, and Carmelo Anthony. In contrast, 59 players averaged more than 23.1%.

“Bosh has to do [a lot] for us in order to be successful,” Heat Head Coach Erik Spoelstra said after Saturday’s win. “He makes it looks easy in terms of where and how we use him…It’s not only scoring and attacking…but he has to facilitate. He is one of our playmakers.”

Of the win against the 76ers, Spoelstra said, “To show that poise was encouraging but we need to get better defensively…Toronto obviously is a worthy Eastern conference opponent. They’re trying to build off last year. We have to be ready.”