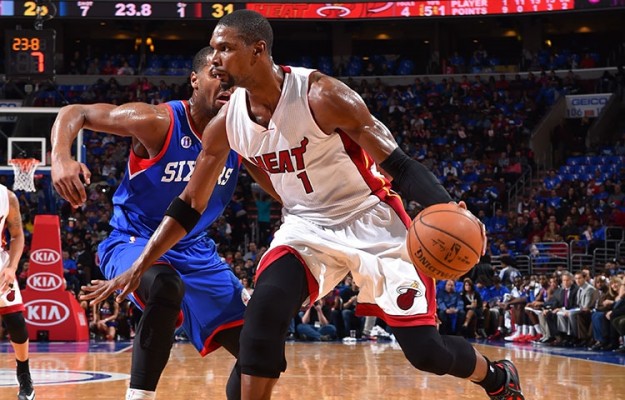 On the day of Head Coach Erik Spoelstra’s 44th birthday, the Miami Heat got Coach Spo the best present he could ask for: a ‘W.’

The Heat defeated the Philadelphia 76ers on Saturday night 114-96 behind Chris Bosh’s 30 points and eight rebounds and Mario Chalmers’ 20 points, nine of which game in the fourth quarter.

Miami’s defense was horrendous the entire night as they allowed Philly to shoot 60 percent from the field up until the 4th quarter, which is when Miami decided to turn up the heat. After allowing 83 points through the first three quarters, Miami limited the Sixers to just 13 points in the final period in large part due to Chalmers’ fantastic play on the defensive end.

“Forty-eight minutes is a very long game for the group we have,” Sixers coach Brett Brown said before the game. “From an experience and resume perspective, navigating through 48 minutes of an NBA game is really difficult.”

‘Rio finished the night with four steals and Spoelstra elected to ride out a lineup of Chalmers, Dwyane Wade, Shabazz Napier, Bosh, and Shawne Williams to finish the game.

When Chalmers was asked after the game what was so critical in that fourth quarter, he responded with, “Our defense. Our defense was lackadaisical in the first half and we got the shots we needed (in the fourth quarter).”

The game started out not-so-good defensively for Miami as they allowed the Sixers to shoot 62% in the first quarter, which was mind-blowing for a Philly team that shot under 40% in their first two games. Norris Cole, who finished with 10 points and four assists, played in his 150th consecutive game, his third season leading the Heat in consecutive games played.

“I love to play, the best ability is availability,” said Cole “I try to stay as healthy as possible. I want to be available to play every single night.”

Philly would not go away in the second quarter. As Josh McRoberts made his debut for the Heat before the half, Tony Wroten and Brandon Davies continued to pour it on, combining for 20 points in the first half. It wouldn’t be until the 55 second mark in the third quarter that Davies would miss his first field goal of the game. The story of the second quarter for the Heat was their outside shooting and Bosh keeping the anchor steady with 18 points and five rebounds. Shawne Williams added three triples in the first half and broke out of his one-game shooting slump.

Assistant Coach Keith Smart said at the break, “We have to make sure to get [the Sixers] shots they’re uncomfortable with. There are only a few guys making a few jump shots, we gotta make them make shoot above the foul line. We’re making too many mistakes below the foul line.”

The Heat tried to pull away in the 3rd quarter with two 10-point leads, however the Sixers continued to light it up from the field. Davies was perfect from the field until he missed a shot late in the third quarter and the Heat had several possessions where they broke down defensively. There was an abundance of defensive miscommunications and the team defense was clearly getting exposed without a help-side defender like LeBron James. Not helping the issue was Miami’s free throw shooting which was 63% leading into the 4th.

However, in the end, the Heat pulled away behind the three-guard lineup of Wade, Napier, and Chalmers. Chalmers made big things happen off the bench for Miami on both ends of the floor, which was highlighted by an off balance one-handed floater that somehow went in after ‘Rio was fouled.

When Chalmers was asked at the end of the game what he got for his coach’s birthday? He replied with, “We got him a win.”

The Heat come back home tomorrow evening as they face the Toronto Raptors at 6:00 PM E/T on Sun Sports.
[xyz-ihs snippet=”Responsive-Ad”]