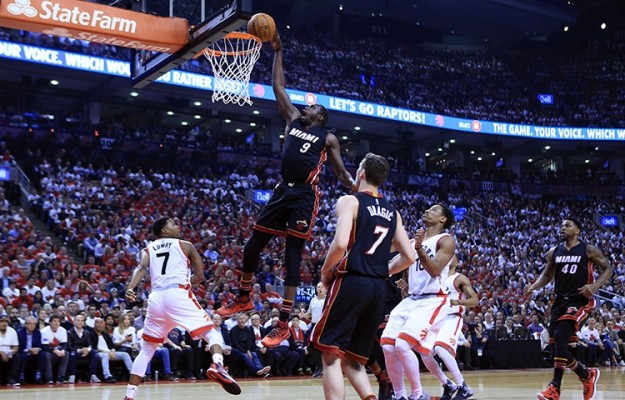 (Toronto, ON) — With a six-point lead and under 20 seconds to play in regulation, the Miami Heat were preparing to easily snatch Game 1 of the Eastern Conference semifinals. Little did they know that the Toronto Raptors weren’t going away that easy. Down by three and no timeouts in hand, opposing point guard Kyle Lowry, who had a miserable shooting night, sank a ridiculous half-court shot to send the game into overtime.

Even as the Heat opened overtime on an 8-0 run, the Raptors once again slithered their way back into the contest off of foolish Heat mistakes and easy buckets to give themselves a chance at the end of the game. Refusing to let the momentum shift and endure another meltdown, Dwyane Wade displayed a variety of late-game heroics, including a steal and an and-one layup with 1.8 seconds left, to propel the Heat to a 102-96 road win in Toronto.

“I was extremely proud of the group” Heat head coach Erik Spolestra said of his team’s late resurgence. “To show the mental resolve, to come back, to take control of overtime. That’s a great mental toughness that I think we showed”

Before the entertainment at the end, the game was ugly. With both teams coming off of Game 7 victories on Sunday, the fatigue showed early. Both squads missed point-blank shots and struggled getting into rhythm. The Heat committed three 24-second violations and came out shooting 2-of-10 from the field in the first quarter, while the Raptors got all 18 of their points from Jonas Valanciunas and DeMar DeRozan.

Things would pick up in the second half for the Heat, largely because of Goran Dragic. The guard, who had scored 25 points in Game 7 last round, spearheaded a 27-20 Heat advantage in the third quarter with 10 points. Dragic pushed the tempo, capitalized off the Raptors’ mistakes, and aggressively found ways to score on the offensive side, including a crafty three-pointer which he got fouled on.

The $85-million general was able to take control of the game and put the Heat in a comfortable position while Wade and others saved their energy for the fourth quarter. The force caught Toronto off guard as Dragic tied his season high in points with 26.

“We are at our best when he’s aggressive and making plays for us” Spoelstra said of his starting point guard. “What I love about Goran is he always is focused on doing his job, competing as hard as he can regardless of circumstance. He doesn’t get caught up in the wild ups and downs that inevitably happen in the playoffs”

Valanciunas had a dominant Game 1 with 24 points, 14 rebounds, three blocks and two steals. DeRozan finished with 22 points and six rebounds, while fellow backcourt mate Lowry struggled heavily. Apart from the miraculous, game-saving three-pointer, the All-Star starter had just seven points and six assists on 3-of-13 shooting.

The Heat handed Toronto their second consecutive Game 1 loss at home this postseason. They also limited the Raptors All-Stars Lowry and DeRozan to 12-of-35 shooting from the field. The duo is highly expected to bounce back and give the Heat some problems in Game 2, even if Lowry has yet to shoot over 40 percent in the playoffs thus far.

Wade, who witnessed his team let go too early tonight, made sure to emphasize the need to be ready for the comeback of Lowry and the Raptors:

“In this league I understand it’s a make-or-miss league. The same shots he (Lowry) missed he can make next game so we got to be prepared for them coming out, playing better, being more aggressive in Game 2,” Wade said after Game 1.