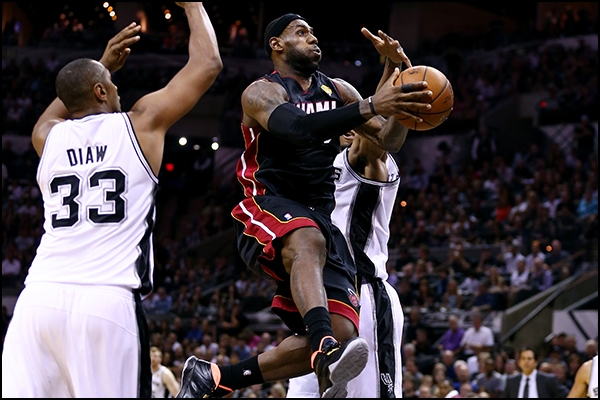 (San Antonio, TX) — Air conditioning at the AT&T Center was not a problem in Game Two of the NBA Finals between the Miami Heat and San Antonio Spurs, but LeBron James was a huge headache for the home team, showing no effects of cramps in a dominant performance Sunday night. Behind James’ 35 points, 10 rebounds and monstrous 14-point third quarter, the Heat stayed true to form following a playoff loss, prevailing 98-96 over the Spurs to even the series at one apiece.

Facing a wave of criticism following his late-game exit with cramps in Game One, James responded with a massive scoring outburst that pushed the Heat to its 13th  straight win following a playoff loss, while helping snap the Spurs’ eight-game home playoff win streak. James was held to just two points on 1-of-4 shooting after the first quarter, but came out firing on all cylinders for the next two quarters with 25 points. During the third quarter, James personally made an 8-0 run to push the Heat up 64-62 with 4:50 remaining. After missing a majority of the fourth in Game One, James played all but 2:38 of the final 12 minutes, shooting 2-of-4 from the field and making a critical pass to Chris Bosh for a corner three-pointer that put the Heat up for good at 95-93 with 1:17 remaining.

“I just continued to attack,” James said of his offensive onslaught. “I had a slow start, but all of misses were in the paint. I was very confident in where I was getting on the floor.”

The Heat struggled to keep pace with the Spurs early on, trailing the entire first quarter and leading for a mere 19 seconds during the first half. Tim Duncan led the charge with 11 points in the first quarter, finishing with 18 points and 15 rebounds on 7-of-14 shooting. Duncan’s double-double ties Magic Johnson (157) for most all-time in the postseason.

Duncan’s stellar play in the paint was not enough to overcome James’ gritty performance and Bosh’s solid play, as Bosh contributed 18 points on 6-of-11 shooting, including a crowd-silencing assist to an open Dwyane Wade for an easy layup and a 98-93 lead with 0:09 left. Held scoreless and without a shot attempt after the first quarter, Wade emerged for 14 points, adding seven rebounds and four assists.

“It was a broken play,” Bosh said of Wade’s game-clinching layup. “I just wanted to make a play to the basket. As soon as I saw [Boris Diaw], I got it to Dwyane and let him take care of the rest.”

Despite the Spurs cutting down on turnovers with 11 on the night (none in the third quarter), the Heat punished San Antonio on the inside with 44 points in the paint. Four missed free throws in the fourth quarter by the Spurs (two coming off a flagrant foul by Mario Chalmers) also proved to help the Heat’s surge down the stretch, with all misses coming from Duncan and Tony Parker. Miami’s defense pressured San Antonio into 37 percent shooting over the game’s final 12 minutes, as the two-time defending NBA champions enter South Beach with home-court advantage. As James sat alone in the post-game press conference, James ensured his critics that while he listened to the ongoing criticism of what Spoelstra called “Cramp-gate,” his confidence was never rattled.

“It’s very difficult at time [to ignore criticism],” James said. “I know what I stand for, as a man and as a role model.”

James credited a change in his play in Game Two to not wearing long tights for the contest, something he wore during his cramp-filled Game One.

“I was watching Game Two of our Finals game against [Oklahoma City in 2012], and that’s why I didn’t wear the tights for Game Two tonight.”

While James refrained from the tights for a stellar outing, Rashard Lewis frustrated the Spurs on the perimeter, scoring 14 points on 5-of-9 shooting, 3-of-7 from the three-point line. Averaging 11.2 points per game as a starter this postseason, James acknowledged how important Lewis’ ability to stretch the defense at the power forward spot.

“Rashard has been huge for us ever since he’s been inserted in our starting lineup,” James said. “His experience and his ability to knock down big shots helps us out a lot.”

As the Heat enter Tuesday night for a crucial Game Three at the American Airlines Arena, the scrutiny of James’ cramps appears to be on the back-burner for now, but Bosh could not help but make a clear response to critics in defense of his teammate and the self-proclaimed “easiest target in sports.’

“Everybody gets criticized,” Bosh said. “Each guy gets picked on and it makes you stronger as a person. I think validating yourself is a constant process. I don’t really care about those things [criticism]. I’m probably the second [easiest target].”