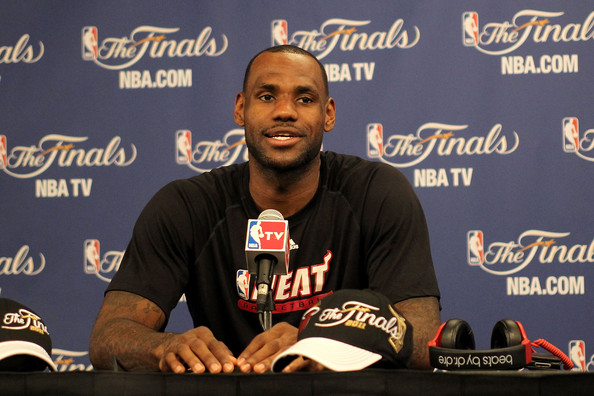 LBJ Talks to the Media After Game 1

• LJ, can you take us through how much more you had to go through in the last 12 hours and what your pain and stiffness level is right now?

“I’m pretty sore right now, just from the muscles spasming up, and now they’re starting to release but I’m pretty sore in my legs. What I went through the last 12 hours was getting up and using the restroom a lot. I got two and a half bags of IV last night right after the game. So between 2 AM and 11 AM, I probably got up about six or seven times, so obviously I got no sleep.”

• LeBron, the county official that oversees the AT&T Center was at the game last night and he said that he thought the media reports of the condition were overstated and that he was actually comfortable. Put it in your words what you felt.

“It was some extreme conditions. I’ve never played in an NBA game like it was last night as far as the heat. Not an excuse, but it was extreme conditions. I looked in the stands at one point and I saw every last fan having fans, double entendre, waving fans and I knew at that point, I said, ‘Oh yeah this is something different.’”

• LeBron can you take us through what you did during the game, how you tried to deal with the heat and when you first started to notice that it was affecting your body?

“Well I mean, I always hydrate. Every time out, I’m hydrating every time out. I know I sweat a lot. I noticed it in warmups. I don’t know where it came from, but I felt it get a little warm and I actually sat at the scores table for like 10 minutes and stopped warming up, so i could cool down a little bit. I really started to feel it in the second quarter and I never change my uniform. But at halftime I changed my whole uniform and in the third quarter I actually came out, I believe, with eight minutes to go in the third and I usually play the whole third quarter. So, I knew the conditions were a little extreme for me personally.”

• Bron, do you ever make anything of social media criticism, the chatter, the Jonathan Martins, the Gatorades?

“Nah. I’m not on social media right now, obviously I hear about it ‘cause I know you guys are gonna ask me so I need to be ready for it. I mean the medical team we have here man, my training staff, and myself, we do a great job preparing for a game. What everybody has to say, you should know me by now, I don’t care. I really don’t. I really don’t care what people say about me. I really don’t care about that sports group, the drink group that had something to say. I’m not gonna say their name. I’m not gonna give them a light in the finals. No, this is about the Spurs and the Heat and it’s not about everybody else man. I don’t care.”

• When you made your last layup, did everything just clench up right then?

• LeBron, how much anger did you experience last night about not being able to be out there at the end?

“I mean, for obvious reasons, yeah, I was very angry. I was disappointed in myself. I mean I did everything that I needed to do to prepare for this game, prepare for this moment and you know, the body failed me last night. So I was angry in the fact that, I couldn’t help my team get over the hump in a huge game 1, trying to make a statement. You know, after I made that layup, we was down two. You know, so, disappointed in myself, angry in myself that I couldn’t’ be out there where I know my team needed me the most, so that was frustrating for sure.”

• Will you continue to get IV’s or are you finished with treatment for this for now?

“Well, I’m not done with treatment but I’m done with IV’s for now, unless I catch a cramp today sitting around in the hotel or tomorrow at practice or something like that. But, I’ve been very preventive, this happened to me a few times, it happened to me a lot in high school, I’ve been tested for it, all the tests came back positive. So, we’re always up on it and stay above the curve and last night was just one of those nights.”

• LeBron was there ever a time where you felt like you should’ve overridden Spo’s decision or was it just impossible to go last night?

“Nah, I believe Spo knows the best for our team. He has the best interest in our team. I did wanna go back into the game, but he was like, ‘Hey, don’t even try it, it’s a long series,’ and I respected that. I could’ve got myself into more trouble you know if i go out there and try to play through a cramp and actually pull something it could be even worse. So, I just left it at that and went and got my treatment, got my IV’s and I’ll just prepare for game 2.”

• LeBron, you may have just answered this, but have doctors ever told you why you may be more susceptible to cramping and why it happens to you?

“No they haven’t. I mean, I’ve been tested for it and all the results came back positive and they said just do what you’ve been doing and continue to hydrate. You know, continue to do everything that you’ve been doing. I mean it hasn’t happened a lot in my career, it just so happened, it’s happened twice in the NBA finals and we all remember that. You know, it happened in the OKC series and it happened last night. You know, bad timing on my part, and hopefully it doesn’t happen again.”

• LeBron, you’ve obviously been educated in the science behind all this since you’ve been dealing with it since high school, but what exactly is the cause, ‘cause everyone says, ‘Just hydrate more, just drink more water,’ but you’re taking pills or salt tablets. What seems to help?

“I mean, the body just decides to shut down. I hydrated as much as I could to a point where your stomach feels like it just can’t take it anymore. Last night it just got to a point where the body just had enough. It just dehydrated between jumpin’ and runnin’ and cuttin’ and sweatin.’ The body just hit the shutdown, there’s nothing you can do about it in my case. It’s frustrating for sure, but there’s nothing I can do about it.”

• LeBron, what do you guys feel like you have to do better in game 2 than last night?

“We gotta defend the paint a little bit better. They did a great job of moving us around and throughout their pick and rolls they got some buckets in the paint. Can’t turn the ball over on the road and we did a great job of covering the three but we loosened up a little bit in that fourth and they was 5/6 from the three point line. I think Danny had two or three, Kawhi had two and Tony had one from our corner, so that would be six. So we gotta do a better job of getting out to their shooters as well. We’ll break down the film today and I’ll give you a more extensive answer tomorrow.”