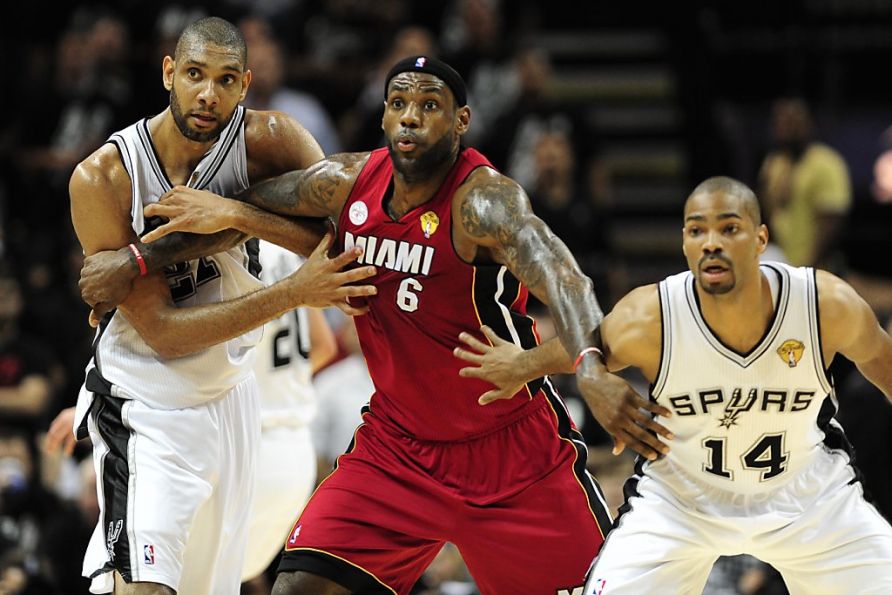 “It’s unbelievable to regain that focus after that devastating loss that we had last year, but we’re back here,” Duncan said in his post game press conference after the Western Conference Finals. “We’re excited about it. We’ve got four more to win. We’ll do it this time. We’re happy it’s the Heat again. We’ve got that bad taste in our mouths still.”

For Duncan, this will be his sixth NBA Finals appearance since 1999, all of which came with the San Antonio Spurs and his third against LeBron James. In his 16th season, Duncan, 38, averaged 16.1 points and 9.7 rebounds in the regular season en route to the rematch with Miami in the NBA Finals. For San Antonio to find continued success, Duncan will need to be a force in the paint both offensively and defensively as well as on the boards. Unsure of his future, this could be Duncan’s last attempt to catch that allusive fifth championship, and his commitment to winning at all costs will be difficult to match.

On the contrary, James, 29, is still in the prime of his career and after securing back-to-back championships, he is poised to win his third straight and join the legendary class of players that have won three NBA Finals in-a-row.

“They don’t like us, I can sense it from Timmy’s comments over the last couple of days,” James said. “They wanted this, they wanted us and we will be ready for the challenge. “

James has averaged 27.1 points per game this postseason, second only to Kevin Durant and will need to remain aggressive offensively for the Heat to have a chance to three-peat. In last year’s NBA  Finals, San Antonio chose to fight under the ball screen against James and force him to beat them with mid-range shots, an aspect of his game that is still a work in progress. However, James was able to overcome and average 25.3 points as well as a career playoff series-high 10.9 rebounds while dishing out seven assists per game en route to earning his second NBA Finals MVP.

“I go in with the mindset to just try and help our team win,” James said. “I just put myself in a position to succeed and go from there.”

In last year’s NBA Finals between these same two teams, the format was two home games for the top seeded Heat, followed by three home games for the Spurs and the final two games back in Miami. The Heat won both game six and seven at home to claim its second straight NBA Championship last year. In the new format for the Finals, each team will get two straight home games beginning in San Antonio, followed by one alternating home game each in games five through seven.

“We haven’t played in this format, but at the end of the day we have to start off on the road and focus on game one,” Dwyane Wade said.

Chris Bosh was assigned the daunting task of matching up against Roy Hibbert of the Indiana Pacers in the Eastern Conference Finals, a matchup that Bosh was able to hold his own in. Bosh has averaged 15.2 points per game this postseason, but in his last three games against the Pacers he improved to 23.3 points per game, thanks in large part to his ability to extend his range out to the three point line. Out-rebounded for much of the series against Indiana, Miami will need Bosh to improve on his 5.7 rebounds per game this postseason in order to limit the second chance points that San Antonio often takes advantage off.

James will need significant contributions from Wade and Bosh while the Spurs defense focuses on him. Wade, who has averaged 18.7 points per game this postseason, will be able to take advantage of the six days off between the Eastern Conference Finals and NBA Finals to rest his ailing knees and continue to produce at an all-star level. With James and Wade feeding off of each other, the floor opens up for the rest of Miami’s players to find open shots for Ray Allen and Rashard Lewis, among others.

“We have to get to our game,” Spoelstra said. “Our game is an aggressive, attacking game but we also have spacing that’s critical to our game.”

Allen has averaged 9.1 points per game to lead the Heat’s bench players but has been inconsistent shooting, only connecting on 38-percent of his shots from deep. Lewis, who only averaged 4.5 points per game this season, averaged 15.5 points per game in his last two games against the Indiana Pacers, connecting on 9-of-12 from behind the arc, including six in game five. As long as one of these two is making his shots, the Heat will add that much needed pressure to San Antonio’s defense.

“What you have to do is prepare yourself to win possessions, win the first game and get into this seven game competition and try to get better as it goes on,” Heat Head Coach Erik Spoelstra said.

In the 2014 postseason, no Spur ranks in the top 25 in points scored per game. They have reached this point by scoring as a committee led by Tony Parker’s 17.2 points per game. Parker, who is questionable for game one hampering an ankle injury, is a key component for San Antonio and its ability to push the pace as well as penetrate to the hoop and create space for open shooters.

“The Spurs are the best team in the NBA, I think they have showed it all year,” Wade said. “You get the best two teams in the finals and it’s going to be a great series.”

“I’m sure they are very motivated coming out of last year’s series,” Spoelstra said about the Spurs. “None of that really matters once you get out there in a series where both teams are playing with incredible urgency and desperation.”

Both franchises are focused but also confident they will add to their hardware collection after the Finals have commenced, but the dream starts as it always does with game one.

“You can’t get ahead of yourself and start thinking about what this means and legacy,” Spoelstra said about being in the finals for the fourth straight year. “None of those things wins you a game, focusing on the moment is what wins you a game.”