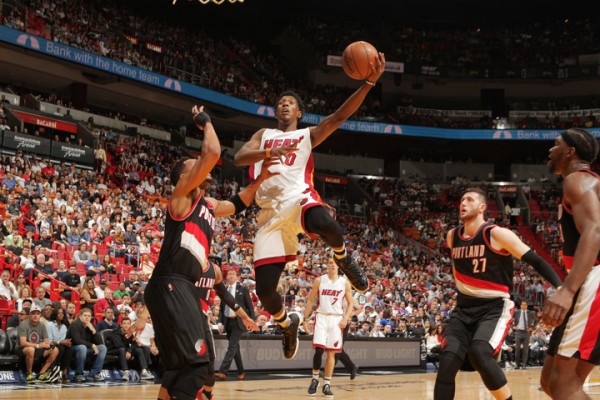 (Miami, FL) – For the first time since late December of 2016, the Miami Heat (34-36) lost a home contest to a Western Conference opponent as they fell 115-104 to the Portland Trail Blazers (32-37) at American Airlines Arena on Sunday night.

Blazers superstar point guard Damian Lillard, a two-time All-Star in 2014 and 2015, was an unstoppable force who lit the Heat up for a season-high 49 points (14-of-21 from the field) while tying a career-high nine 3-pointers made in one game.

“Like I’ve been saying, we’re at the point in the season where you’ve got to do whatever you’ve got to do to win games. We want to be in the postseason, and every one counts,” Lillard said after the game. “We’ve got to leave everything out there and empty the clip every night, and that’s what we’re gonna continue to do.”

The Heat, who were without the services of shooting guard Dion Waiters due to his sprained left ankle suffered during Friday night’s 123-105 victory over the Minnesota Timberwolves, could not keep up with Lillard’s explosiveness and ability to take over the game.

“Obviously, that was one incredible performance. There’s less than five players in this league that you have to do something different on your pick-and-roll coverage and Lillard is obviously one of those guys,” Heat head coach Erik Spoelstra said during his postgame press conference. “Once he got it going, there haven’t been many shooting performances like that this year in the league to be able to score basically 50 on 21 shots on an early back-to-back. It just shows his level of efficiency. He was outstanding.”

James Johnson, who continues to statistically have the best season of his career in his first year with the Heat, had a team-high 24 points (9-of-13 from the field) to go along with seven rebounds, five assists, two steals and two blocked shots.

“This team, we don’t get deflated,” Johnson said. “We understand the competition and what it takes to win. Those guys just didn’t let us come back. Normally, we keep being physical the whole time and normal teams will crack, but this team didn’t.”

Portland, which was an impressive 13-of-26 from behind the arc as a team, trumped Miami’s lackluster 9-of-31 effort.

Blazers center Jusuf Nurkic, a recent acquisition from the Denver Nuggets, had 21 points and 12 rebounds for Portland. While shooting guard C.J. McCollum added 18 points for a Blazers team that moved within one game of Denver for the eighth and final playoff spot in the Western Conference.

Up next, the Heat will play their fourth game of a five-game homestand at American Airlines Arena as they host the lowly Phoenix Suns (22-48) on Tuesday night. The contest, which is scheduled to tip off shortly after 7:30 p.m. ET, will be broadcast live locally on Fox Sports Sun.
[xyz-ihs snippet=”Responsive-ImagenText”]