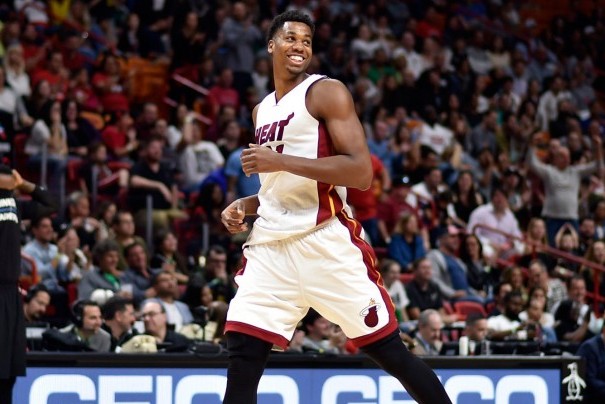 (Miami, FL) – Overcoming adversity is typically a pretty intimidating task for most NBA teams. However, over the last two months of the 2016-17 season, the Miami Heat (34-35) have proved that notion otherwise.

In their 123-105 victory over the Minnesota Timberwolves (28-40) on Friday night at American Airlines Arena, the luck of the Irish didn’t seem to help the Heat on St. Patrick’s Day as they lost standout guard Dion Waiters to a nasty left ankle injury in the final minutes of the second quarter.

“I was just hanging out with him a little bit in the training room. It’s a sprained left ankle, the same left ankle that he sprained in Minnesota. So I don’t know what his comment is with Minnesota, but he sprained it similar to way he did it last time,” Heat head coach Erik Spoelstra said during his postgame press conference. “There’s no timeline on it. There’s no way to really tell until we get to the next day.”

Waiters, who had to be carried off the court by his teammates late in the first half after he rolled his ankle, finished his night early with six points (3-of-3 shots made from the field), three assists and two rebounds.

The Heat, winners of 23 of their last 28 games, have now put themselves one full game ahead of the Detroit Pistons (33-36) for currently the seventh playoff spot in the Eastern Conference. Miami stepped up as a team in a big way as it ultimately pulled away from the Timberwolves in the fourth quarter.

Star center Hassan Whiteside put together a flawless performance on the night, going off for 23 points (a nearly perfect 10-of-11 from the field) with 14 boards and four blocked shots.

“Man, guys are just playing hard. We lost Dion, so we lost a key piece, but guys came in and picked it up. We couldn’t feel sorry for ourselves,” Whiteside said immediately after the win. “These guys are very hungry, man. A lot of these guys, we got them out the jungle. These guys been written out in the NBA and people don’t give them a chance. They came in with chips on their shoulder. I love these guys.”

Off the bench, Heat shooting guard Tyler Johnson came through in the clutch for Waiters. In 32 minutes, Johnson tied a team-high with 23 points (9-of-15 from the field and 15 points in the third quarter alone) to go along with three assists and two rebounds.

“I don’t know, I guess there was no way to go but up from early in the season,” Johnson said with a laugh of his team’s home success. “We talked about if we were going to be a playoff team, this was a place we had to defend. We’ve been able to do that since the All-Star break, for sure. We’ve just got a lot of guys who can make different things happen.”

Miami point guard Goran Dragic had a double-double effort with 19 points and 10 assists, including a few acrobatic shots late in the game, while power forward James Johnson had one of his best games in a Heat uniform with 17 points (8-of-12 from the field) and six assists in 27 minutes off the bench.

In a losing effort for the Timberwolves, the young star tandem of center Karl-Anthony Towns (31 points and 11 rebounds) and small forward Andrew Wiggins (26 points and three rebounds) packed a big punch on offense for Minnesota. Point guard Ricky Rubio (20 points and six assists) had his fourth consecutive game in which he scored at least 20 points, while small forward Shabazz Muhammad had 15 points (7-of-10 from the field) and two assists..

Up next, the Heat will play their third game of a five-game homestand at American Airlines Arena as they host the Portland Trail Blazers (30-37) on Sunday night. The contest, which is scheduled to tip off shortly after 6:00 p.m. ET, will be broadcast live locally on Fox Sports Sun.
[xyz-ihs snippet=”Responsive-ImagenText”]