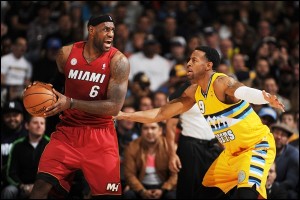 Photo by Garrett Ellwood: "After blowing a 19-point lead on Wednesday, Miami (7-3) held on with the clutch play of LeBron James for a 98-93 victory over the Nuggets."

The Miami Heat have not been in South Beach for the past nine days, but just one road game in Phoenix on Saturday remains in this six game road trip.

After blowing a 19-point lead on Wednesday, Miami (7-3) held on with the clutch play of LeBron James for a 98-93 victory over the Nuggets.  James was both a facilitator and scorer leading the team with 27 points and 12 assists.

It was the second game in a back-to-back after falling short to the Clippers 107-100 the night before.  Dwyane Wade sat out the game in Denver with a sore left foot, and is a game time decision for Saturday’s game.

Further complicating the injury report, point guard Mario Chalmers left the game early with a strained tricep.  Second year player Norris Cole has stepped up in place for Chalmers, who is listed as day-to-day.

Shane Battier and Mike Miller made a combined 10 three pointers for Miami, and without Wade in the lineup, their ability to stretch the defense and be reliable shooters from deep will be crucial for the offense, especially when James is doubled.

“We were connected as a group and that’s been a problem thus far on the road.”  Battier said about Miami’s performance against Denver.  “I thought all five guys were on the same page tonight and down the stretch that is the most important thing you can do.”

After three straight games of at least 20 points, Chris Bosh has yet to eclipse 15 in the past two games against two improving, young centers (DeAndre Jordan and JaVale McGee).  Although Bosh is far superior athletically, the road will not be any easier against Phoenix center Marcin Gortat.

Gortat is having a career year averaging 12.3 points per game, 10.4 rebounds per game and is second in the league with 3.3 blocks per game.

Gortat has benefited from the addition of Argentinean power forward Luis Scola, who signed a three year 13.53 million contract with Phoenix this off-season.

Scola, spent the first five years of his career with the Rockets, and his 15.3 points and 8.9 rebounds per game are both ahead of his career averages.

Replacing the two-time MVP Steve Nash who left for the City of Angels is a challenge that Goran Dragic has embraced full-force.  Dragic is leading the team in both scoring (16.1 points per game) and assists (7.2 per game) for the new look Suns.

Shannon Brown is relishing in his role with Phoenix as a dynamic perimeter player.  Brown is averaging 14.0 points per game this season and if Wade cannot play, Brown will have the advantage against the older and slower Ray Allen.

After brief stints with Miami and Minnesota, Michael Beasley also joined Phoenix this off-season, signing a 3 year 18 million contract back in July.  Beasley has found his niche in the Sun’s starting lineup, averaging 13.1 points per game and 5.1 rebounds for the eight ranked offense in the league.

These two teams squared off back on November 5, at American Airlines Arena with Miami winning handily 124-99. James led the Heat with 23 points and 11 rebounds but if Miami will be without Wade again, who had 22 points, the rematch will be a much tougher test.

The Suns (4-5) will face-off against the Lakers tonight with former Suns’ Coach Mike D’Antoni now heading the Lakers while still recovered from knee replacement surgery.

After the game, the Heat will head back to South Bach for a showdown with the Bucks on Wednesday and the start of  four straight home games to finish out the month of November.