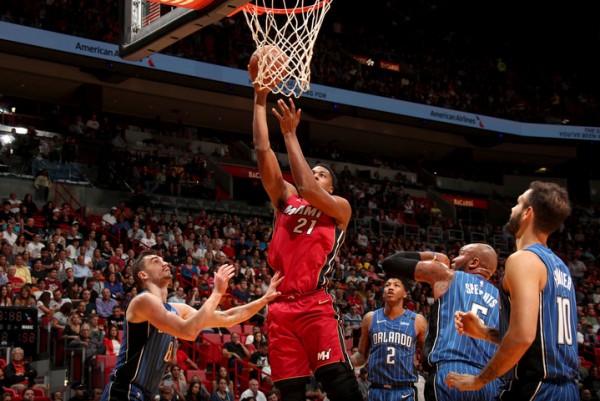 (Miami, FL) – The Miami Heat got great news on Tuesday morning when it was announced that big man Hassan Whiteside would finally return to the court after nearly a month-long absence due to injury. Experts wondered what factor Whiteside would play for the Heat in Tuesday night’s matchup with the Orlando Magic. In the end, Whiteside would finish with only seven points and eight rebounds in 18 minutes of play, as the Heat steamrolled over the Magic in the final quarter of the game on their way to lopsided 107-89 victory.

“My idea coming into it, that he was going to play about 20 minutes,” Heat head coach Erik Spoelstra said of Whiteside’s return following the game. “I was ready to put him back there in the fourth, but the way that group was going, there was no way I was going to take anybody out of the that group.”

Throughout the first three quarters of play, both teams battled for control of the game. Late in the third quarter, however, Miami was down 57-47 and looked to be on the verge of letting the game get out of hand. It was then that Goran Dragic, who had struggled for most of the night, led Miami during a 12-2 run to tie the game up with just over four minutes left in the third, 59-59.

Dragic added to his personal highlight reel in the third quarter when he schooled Orlando big man Bismack Biyombo on his way to a silky up-and-under layup. He would finish the night with 14 points, six assists, four rebounds, and two steals.

Both squads battled back and forth in the remaining four minutes of the third period on their way to a 68-68 tie game. It appeared that the Miami faithful were going to have to endure a nail-biter to the finish, but in the final quarter of play it quickly became clear that the Heat had other plans.

Miami got out to a quick four-point lead in the final frame after Tyler Johnson, who scored 17 points in the game despite shooting 1-of-8 from beyond the arc, hit a quick jumper and then hit both shots after being sent to the free-throw line. The Magic fought back to get the score to within one point, but then Josh Richardson, who had scored just six points in the first three quarters, hit Miami’s next seven points to open up a 81-74 lead with just under eight minutes remaining in the game. He would finish the night with 20 points, seven rebounds, and five assists.

“It’s important just to be a guy that tries to move the needle,” Richardson said following the game. “That’s my biggest thing. Every time I’m on the court I’m going to try to make a positive impact, whether it’s in the game, or in practice, in the weight room, or wherever. I always try to make sure guys are moving in the right direction, and make sure I’m a positive force to what we’re doing.”

With the Magic still in striking range it became Wayne Ellington‘s time to shine. Over the next three minutes, the Man with the Golden Arm went 4-of-4 from beyond the arc on his way to a fantastic game off the bench with 18 points, six rebounds, and two steals. Along with Ellington, both Johnson and Richardson added points during Miami’s decisive 19-6 run, and when the dust settled, the Heat were up, 100-80. The celebration amongst the raucous home crowd had begun.

“Just being patient,” Ellington said of his clutch night shooting the ball. “We were getting good looks all night. The first half it didn’t really fall for us, but stayed patient, stayed poised. Like I always say, my teammates, they got me open.”

Miami would go on to record its highest-scoring quarter so far this season, finishing with 39 points in the final frame. While offense played the starring role, the Heat’s defense was also superb. Rookie big man Bam Adebayo moved back into a bench role with Whiteside’s return but still recorded eight points, nine rebounds, four assists and two blocks in 25 minutes of play. Kelly Olynyk also played well, finishing with 15 points, 12 rebounds, three steals, and two blocks. As a team, Miami finished with 11 blocks and five steals in a game that it dominated on both sides of the court.

Perhaps the Heat were fueled by the homecourt crowd. Perhaps they were fueled by the return of their talented center. Whatever it was, Tuesday night’s game was certainly one of the best performances the Heat have had from start to finish this season. They will have to wait until Friday to see if they can continue their brilliant play, when the Brooklyn Nets travel to South Florida to take on the Heat.