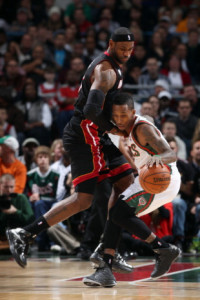 Getty Images, "The road hasn’t been all that kind to the Heat (20-8) this season, as they are just 6-6 away from home despite having the best overall record in the Eastern Conference."

After a miserable weekend on the road that included a pair of surprising losses to the Milwaukee Bucks and Detroit Pistons, the Miami Heat will look to get back on track Monday night with another road challenge against the Orlando Magic.

The road hasn’t been all that kind to the Heat (20-8) this season, as they are just 6-6 away from home despite having the best overall record in the Eastern Conference.

Miami appeared to have righted the ship with a six-game winning streak that included a pair of solid road performances over admittedly sub-par teams in Dallas and Charlotte.

It appeared that Miami was headed for another such performance after a dominant first quarter against Detroit on Friday, jumping out to a 32-17 lead.

But the Pistons lit up the Heat defense for 41 points in the second quarter and went on to outscore Miami 92-67 over the final three quarters to take a 109-99 victory.

Dwyane Wade had to sit out that game after being suspended by the NBA for a play that resulted in Wade’s leg hitting Charlotte guard Ramon Sessions in the groin.

He returned for Saturday’s game against Milwaukee, but it was another defensive meltdown by the Heat that resulted in another loss, as they gave up 35 points in the fourth quarter of a 104-85 defeat.

While the defense seemed to fall apart late, it was the Miami offense that LeBron James assigned the largest share of blame, particularly for the 21 turnovers that the Bucks converted into 25 points.

“We played pretty good defense. I mean, they shot 40 percent from the floor,” he said.  “But we turned the ball over 20-plus times and gave up 20-plus points off of those turnovers.  That’s not going to be winning basketball.

“When you’re on the road against a team that’s sound defensively and is going to take a lot of attempts, you can’t give them extra possessions because they’re going to make you pay.”

James was guilty of six of those turnovers, which marred an otherwise terrific game that saw him score 26 points on 11-of-20 shooting to go along with seven assists and six rebounds.

Wade was also good in his return to action, scoring 24 points on 10-of-19 from the field.

Unfortunately for Miami, the other 10 Heat players to log minutes scored just 35 points on 12-of-43 shooting.

It was a similar story Friday when monster efforts by James and Chris Bosh – the two combined for 63 points on 26-of-39 shooting – went wasted thanks to the rest of the Heat players accounting for 36 points on 13-for-38.

“The last 48 hours have not gone the way we wanted it to,” Heat coach Erik Spoelstra said after Saturday’s loss. “But however you get to these points in the season, they can be pivotal points if they’re handled the right way and you come out of it the right way. Sometimes they can be breakthrough moments.

“Sometimes you don’t know how you get in it, but you get in a little bit of a funk and you’re not playing like you’re capable of. That’s what the next 48 hours should be about, reconnecting with each other. A lot of times it’s not about schemes and X’s and O’s, but about getting back to the basics of scheme and getting into the purity of just winning.”

Miami will face an Orlando team that has started to slide after an unexpectedly strong start, losing five in a row to fall to 12-18 on the year.

The losses haven’t come against especially tough opponents either, falling to the likes of Washington, New Orleans, and twice to the Toronto Raptors, the last of which coming by a margin of 35 points Saturday night in Orlando.

The Magic have surely missed veteran forward Glen Davis, who was averaging 16 points per game before missing the last five games due to a sprained left shoulder, making an already pretty miserable offense even worse.

Orlando currently ranks 28th in the league in offensive efficiency, with the Heat ranking third.

It has been more respectable at the other end of the court for the Magic, who are 11th in the NBA in defensive efficiency.

Though the Magic have had some nice moments under first-year coach Jacque Vaughn, they’re another opponent that the Heat should be expected to beat with a solid road effort.

However, those kinds of efforts have been few and far between for Miami this season.

“We need to take some steps forward in terms of developing our resolve and road toughness,” Spoelstra said. “We’re not quite there yet. We have it at home, but we have to develop it on the road.”

The Heat will need to resolve their road woes soon enough, as they’ll follow up a three-game home-stand after Monday’s game with six straight and 10 out of 12 away from home.