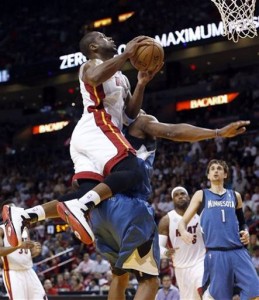 Associated Press: “Particularly in the first half, Dwyane Wade utilized his ability to turn his back to the basket, and worked efficiently in the post to score 18 first half points.”

As expected, the Minnesota Timberwolves’ ability to bully the undersized Miami Heat on the glass proved costly early, that was until LeBron James took over in the second half.

James scored 14 of his 22 points in the second half as the Heat improved to 12-2 at home with a 103-92 victory over the visiting Timberwolves.

For Miami (16-6), James had just eight points in the first half, but ramped up the aggression on the offensive end in the second half by facilitating the offense and contributed by setting up teammates as well as knocking down the shot when necessary.

After being victim to the deep ball in their six losses, Miami knocked down 13 three pointers, the most this season and marked the first time in 13 games they made over 10.  On the contrary, Minnesota shot a dismal 4-of-17 from deep as the Miami defense held their opponent under 100 points for the fifth straight game and have seemed to return to the form that led them to a championship last year.

Particularly in the first half, Dwyane Wade utilized his ability to turn his back to the basket, and worked efficiently in the post to score 18 first half points.

Wade led Miami with 24 points and dished out four assists as well.  As a guard, if he can persistently score from the low post, Wade will add to his arsenal as well as increase his longevity as a star in the league.

Minnesota, who was without point guard Ricky Rubio, scored 14 second chance points in the opening frame off of a remarkable eight offensive rebounds, ending the quarter on a 7-0 run to lead 27-21.  Filling in for Rubio, veteran point guard Luke Ridnour scored 13 points in the losing effort.

Miami was outrebounded a record 18-3 in the first quarter with Kevin Love grabbing nine in the first 12 minutes.  But Miami went on an 11-0 run to end the first half and after a Mario Chalmers three pointer as time expired, the Heat took a 52-49 lead going into the break.

Chris Bosh added 15 points, although he was nullified by Minnesota’s frontcourt and was hardy a factor on the glass with just two rebounds.

Love finished with 11 points and 18 rebounds and on nearly every possession in the first half, he boxed-out with tenacity to position himself for a rebound.

Minnesota (12-11) scored 26 of their first 33 points in the paint, but Miami hunkered down and increased their intensity on defending around the basket in order to make up for the lack of size.

Additionally, center Nikola Pevokic recorded another double-double with 18 points and 12 rebounds, nine on the offensive glass.

After playing last year in his home country of Russia, Andrei Kirilenko has put together one of his best seasons in the NBA.  Kirilenko took advantage of his teammate’s ability to rebound, capitalizing on second chances that led to open shots and finished with 22 points.

Off of the bench, point guard Norris Cole held J.J. Barea in check, who was a mismatch for the Heat in the 2011 NBA Finals when he played for the Dallas Mavericks.

Cole’s speed from end-to-end to start the fast break as well as his improved three point shooting, helped spark a 12-4 second quarter run by Miami to cut the Minnesota lead to 42-41 at the 3:28 mark.  Cole finished with eight points, four assists and two steals in 24 minutes.

Although Miami was outrebounded 52-24, they forced 19 Minnesota turnovers that ignited their high octane offense.

It was a critical win for the Heat, who hold just a one game lead over the Atlanta Hawks in the Southeastern Division.