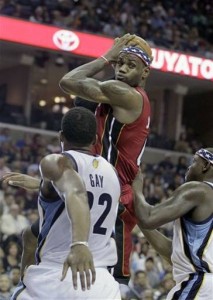 Yahoo Images: "James finished with 20 points, 10 rebounds and six assists, scoring 20 points or more in each of the Heat’s first seven games of the season. "

The Miami Heat traveled to Memphis for a showdown of two teams riding four game winning streaks but the Heat’s streak was cut off by the surging Grizzlies with a decisive 104-86 victory.

After cutting the Grizzlies’ lead to 82-73 in the fourth quarter, the Heat defense lacked the effort to control the paint and prevent the inside-out passes and surrendered a 16-3 run until Coach Erik Spoelstra conceded defeat by emptying the Miami bench.

“There are always a handful of moments that you are connected physically and mentally to make crucial plays, they did so and we did not,” Spoelstra said.

Miami came out flat to open the game, trailing 12-4 until the six minute mark when an 8-0 Heat run was capped off with a monster alley-oop from Mario Chalmers to Lebron James with “King James” looking down at the rim, defying the laws of gravity and tying the game 12-12.

James had 10 points, five rebounds and three assists in the opening quarter, but Miami shot just three-of-nine from the free throw line and trailed 22-21.  James finished with 20 points, 10 rebounds and six assists, scoring 20 points or more in each of the Heat’s first seven games of the season.

“Teams are coming after us.” Spoelstra said. “We did not do enough things well to put ourselves in the position to win, but they played very well.”

The Miami offense was flowing with excellent ball movement, along with drive and dishes, but open shots just would not fall.  The Heat shot 4-of-15 from deep but on the optimistic side, Chalmers maturation has been prevalent as his unselfish play and drastic improvement in passing has been a bonus for the Heat’s league leading offense.The Grizzlies’ bench led by Wayne Ellington, who had a season-high 16 points in the second quarter, managed a 14-1 run to end the half strong and extended their lead to 56-41. Ellington had a career-high 25 points and made 7-of-11 from three point range.

Not to be outdone, Rudy Gay had 21 points and eight rebounds for Memphis who have now won five in a row to lead the Western Conference.

“We just love playing basketball, and everything else will come,” Rudy Gay said.

Off to their best start in franchise history, Memphis (5-1) was hot from the three point range, and when it rains, it pours, shooting 14-of-23 collectively while Miami struggled at the free throw line making only 22-of-36 attempts.  The Heat (5-2) came into the game the highest scoring team in the league but was held below 90 points for the first time all season.

Leading the league in rebounding with 15.0 rebounds per game, Zach Randolph continued his dominance in the post, exposing the weakness of the smaller Miami lineup.  Randolph, who had 18 points and 12 rebounds, forced the Heat to substitute Udonis Haslem for Shane Battier, sacrificing the shooting ability of Battier for the size and physicality of Haslem.

“We are getting the shots we want but we have to rebound and defend better,” Heat Assistant Coach Bob McAdoo said at halftime.

Chris Bosh led Miami with 22 points and added eight rebounds, but struggled to contain the tandem of Zach Randolph and Marc Gasol who outmuscled the slimmer Bosh.

“They played very physical and did what they needed to win at home,” Spoelstra said.

Returning to the starting lineup after missing a game with the flu, Dwyane Wade struggled, shooting a dismal 3-of-15 from the floor and his eight points matched his rebounding total.

Another issue for the Heat defense was Memphis point guard Mike Conley, who penetrated the middle of the defense with ease off of the dribble and distributed to an array of open teammates.

Conley, the fourth overall pick of the 2007 NBA draft out of The Ohio State University, had 18 points and nine rebounds.  Four different players from Memphis scored 18 points or more and their defense continues to stifle opposing offenses.

“We did not make enough plays at the right times when we needed them to win,” Spoelstra said.

The difficult road trip continues tomorrow, with all eyes set on Houston and the tandem of Jeremy Lin and James Harden.

AllenboshchrisCoachConleydwyaneEllingtonerikgameGasolGayGrizzlieshaslemheatjameslebronMarcMemphismiamimikeRandolphRayrecapRudyspoelstraudoniswadeWayneZach
← Previous Story LeBron Delivers Dagger as Heat Walk Away with 95-89 Road Win
Next Story → James Explodes for 32 in Second Half, Heat Escape 113-110