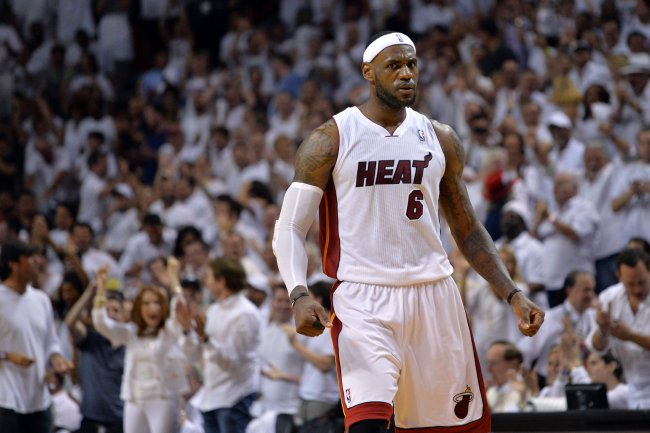 (Miami, FL) — The Miami Heat have now made it four consecutive times to the NBA Finals, the first team in 27 years to complete this feat; and have knocked the Indiana Pacers out of the playoffs for the third consecutive year, this time in six games.

“It’s all about 15 special men and what they have been able to accomplish over these past four years,” Heat owner Micky Arison said.

After dropping game five on the road with LeBron James in early foul trouble and unable to contribute as he normally is expected to, Miami dominated game six, claiming the Eastern Conference Championship with a 117-92 blowout victory. With the win, the Heat become the first team in 27 years to move on to four straight NBA Finals.

“It was just one of those games that we want to play from beginning to end,” Chris Bosh said. “We just wanted to make a statement.”

James returned to his usual form, leading the Heat with 25 points, while adding six assists and four rebounds after scoring just seven points in game five. Despite the obnoxious antics of Lance Stephenson to distract him, James was able to tune out the banter and compete at the highest level he has been so accustomed to.

Returning to the lineup after missing two straight games with a thigh contusion, Chris Andersen did what he does best: bring tenacity off of the bench while stifling the opposing center. Andersen finished with nine points and 10 rebounds while making all four of his shot attempts, but it was his defensive effort that was just as crucial. Matched up against the imposing Roy Hibbert, Andersen’s defensive effort held Hibbert to eight points, rendering him nearly ineffective.

The defensive intensity from the Heat wasn’t limited to Andersen. After scoring 37 points in game five, Paul George missed the first six shots he took while James smothered him defensively. But George was able to bounce back, making five three pointers and finishing with a team-high 29 points and eight rebounds.

“It is frustrating especially when we set out a goal to earn the number one seed and we didn’t get to the goal of playing a game seven on our floor,” George said.

Miami made a remarkable 59.5-percent of its first half shots while holding Indiana to just 37-percent. Despite the ability of Miami to put up big numbers offensively, it is the defense that elevates them over other elite NBA squads. The Heat did not falter in the second half, connecting on 57.9-percent on its shots for the entirety of the game.

“I know we had a very angry group when we met for practice yesterday, a very focused group at practice, but those types of things don’t necessarily guarantee anything,” Heat Head Coach Erik Spoelstra said.

David West did all he could to take advantage of the smaller players defending him. West finished with 16 points and ended up fouling out before Indiana could ever entertain the idea of a comeback.

Chris Bosh continued to execute at the all-star caliber level he has always been capable of. Bosh scored 25 points and grabbed eight rebounds in the closeout victory.

In 25 minutes, Dwyane Wade was able to score 13 points, grab six rebounds and dish out six assists in an all-around effort. Wade continues to produce despite his ailing injuries and his tremendous effort will be needed going forward for the Heat.

“It’s about not being able to reach their level,” Vogel said. “They are playing at a championship level; they have the ability to raise it to an ability that’s too much to overcome.”

Following a series-high 18 points scored in game five, Rashard Lewis found himself in the starting lineup for the second straight game and continued to contribute on the offensive end. Lewis connected on three shots from deep, leading to 13 points total in game six.

“He’s showing a little bit of his younger bounce,” Spoelstra said about Lewis.

After surpassing Michael Jordan for the most 25/5/5 games in playoff history, James continued to assert his dominance over the rest of the league.

“We are competing against the Michael Jordan of our era, the Chicago Bulls of our era—you have to tip your caps to them,” Vogel said about the Heat.

James’ infamous remark about how many rings the Heat would win after the “Big Three” formed in 2010 was mocked by those across the league. Now Miami moves on to the next step to reaching the predisposed notion of championships: a chance to three-peat and earn its spot as a dynasty.

The Heat will await the winner of the Oklahoma City Thunder and San Antonio Spurs series before the Finals begin on Thursday, June 5.