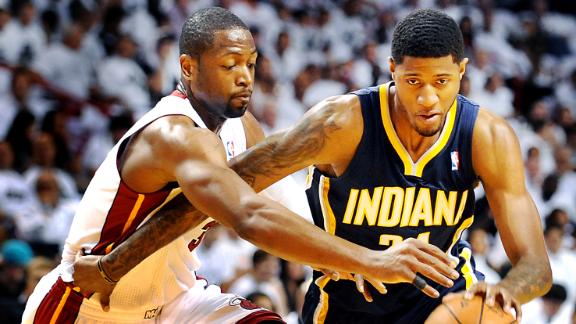 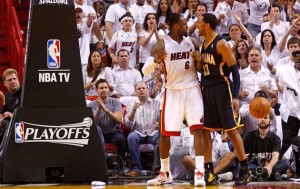 Coming off of a 99-71 thumping of the Washington Wizards, the Miami Heat will hit the road to face off against a much more formidable foe in the Indiana Pacers to start a tough six game road trip on Tuesday.

Miami defeated Indiana in the 2012 Eastern Conference semifinals in six games, but it was not easy for the Heat, after Chris Bosh left the first game with a strained abdomen; LeBron James turned up the intensity and took over against a Pacer team focused on disrupting King James’ flow.

It was the perfect storm of a brutal series and Bosh’s injury that allowed the Heat to reach their potential and ultimately win the NBA Championship.

Miami (23-9) has cooled off over the past week, going 3-3 stumbling against a few weaker teams. But the Heat’s dominance of the Wizards proves they have what it takes to turn it on at any point and will need to do so away from American Airlines Arena.

“We have to start winning on other teams floors,” Ray Allen said.  “Defensively we have to be able to come together and stop someone in their own building.”

James continues to fill up the stat sheet averaging 26.5 points, 8.3 rebounds and 7.0 assists per game, a line that has become expected of the MVP each and every game.James will be matched up against Paul George, and expect a great one-on-one battle between these two with James prevailing.

“Going into this road trip, we are going to need a lot of guys to step up,” James said.

His partner in crime (on the court of course), Dwyane Wade has come around after a slow start, averaging 20.4 points, 4.6 rebounds and 4.4 assists per game and is focusing on his ability to score in the low post against smaller guards.

Chris Bosh, the third wheel, is having a great season in his first as the starting center.Against much stronger defenders he is averaging 17.8 points and 7.6 rebounds per game, but it will not get easier for him against the Pacers’ front line.

Indiana (19-13) is atop the Central Division by one game over the Chicago Bulls.

The Pacers are coming off of a 96-80 win over the Milwaukee Bucks on Saturday and have kept their opponents under 100 points in four straight games.

They have been able to accomplish this without their leading scorer, forward Danny Granger who has missed the entire season thus far with a left knee injury.

In his absence George has stepped up, averaging 16.4 points and 7.3 rebounds per game for the Pacers.

Point guard George Hill is also having a solid season averaging 15.2 points and 5.1 assists per game. The ability of Mario Chalmers and Norris Cole to slow down Hill’s attack will be critical for Miami to defeat Indiana.

The formidable post duo of center Roy Hibbert and power forward David West, proved a mismatch against the Heat last season.Averaging 16.8 points and 7.9 rebounds per game, West is a versatile big that can consistently shoot from midrange and utilizes and array of power post moves to fill the stat sheet.

Hibbert is a young center out of Georgetown University, standing at 7-feet-one-inch; he is one of the largest players in the entire NBA.

Coming into his own, Hibbert is averaging 9.8 points and a team high 8.2 rebounds per game.He is ranked third in the league averaging 2.74 blocks per game and is the rim protector for Indiana, challenging anyone that steps into his domain in the post.

On Monday, Miami waived center Josh Harrellson, who has seen just 5.6 minutes per game averaging 2.0 points, an indication that players such as Udonis Haslem and Joel Anthony will need to continue to have a strong presence in the paint.

Similar to the Eastern Conference semifinals last season, expect a physical battle, with confrontations, hard fouls, and scrappy play all-around the entire night.  The Heat has struggled in the rebounding category, allowing bigger teams to get second chance points and extending their team’s possession.

Miami will again get outrebounded most likely, but can overcome by taking and making quality shots and not turning the ball over carelessly.

The Heat should be able to rely on their athleticism and star power to get out in transition and play at a faster pace than Indiana who will want to slow down the pace and play in half court sets.

“Our mentality is to take it one game at a time, worrying about what we need to do to win,” Wade said. “We look forward to challenges and this challenge will be good for the team.”