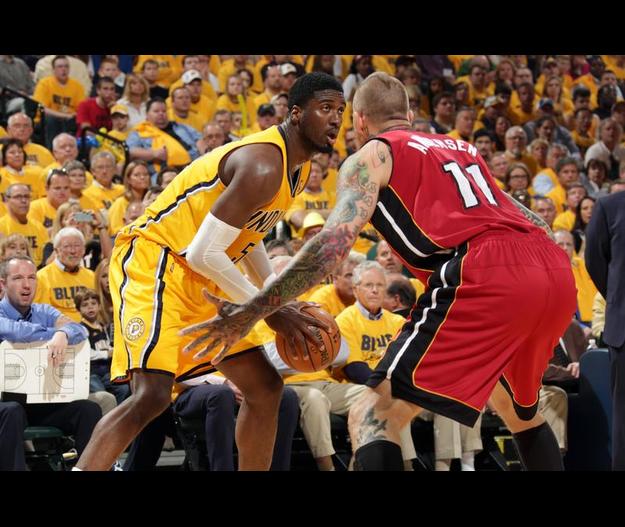 In the much anticipated rematch of last season’s Eastern Conference Finals, the battle between the Miami Heat and Indiana Pacers started with the home team winning game one for the second year in-a-row.

This year it was the Pacers, whose 107-96 game one victory gave them the early advantage in the series. The 107 points was the most scored in the playoffs by the Pacers, who also had six players score in double figures, including all five starters scoring 15 or more points.

“I really liked our offense, from our starters in particular,” Pacers Head Coach Frank Vogel said.

Using his quickness and ability to get to the basket off of the dribble drive, George was able to force the defense to focus on him, allowing his teammates to find open looks. George dished out five of his seven total assists in the first quarter alone, three of which were to George Hill for three point shots. Indiana made 59.5-percent of its first half shots en route to a 30-point first quarter and 55-point first half, both of which are the most Miami has surrendered in this year’s playoffs.

Although the physical play from each team escalated, it didn’t show in the box score defensively. Indiana went in to the locker room with a 55-45 lead at halftime that they never surrendered. The Pacers’ lead swelled to 18-points at 72-54 with six minutes remaining in the third quarter. Miami was never able to get within nine points of Indiana in the second half.

Spoelstra decided to match strength with strength by guarding the powerful West with James.  The modification to the lineup allowed for the Heat to put Shane Battier, arguably its best defender on George. George, the Pacers leading scorer was able to facilitate his teammates as well as produce on his own. He finished with a team-high 24 points and had seven assists. The imposing West was able to utilize his offensive post game and relentless attack to score 19 points and pull down seven rebounds.

“Having Battier on me, I think I’m a little quicker and I don’t think it poses much of a threat for me,” George said.

As was the case in the Eastern Conference Semifinals against the Brooklyn Nets, the Heat wasn’t able to get any consistent offensive help for James and Dwyane Wade. Proving that his knees are just fine despite the comments from Lance Stephenson, Wade was aggressive offensively, finishing with a team-high 27 points.

“He is one of the best scorers in the history of the league,” Vogel said about Wade. “We have to take better account of him and do a better job on him defensively.”

Stephenson may not have the ability to keep Wade in check defensively, but he was able to excel offensively. The New York native finished with 17 points and a team-high eight assists, backing up his pregame talk with his play on the court.

Much focus was given to the matchup between James and George, yet neither shied away from the pressure. James finished with 25 points and 10 rebounds but also led the team with four turnovers. The other three Miami starters, consisting of Battier, Chris Bosh and Mario Chalmers, combined for just 18 points.  Chris Andersen added a playoff high 14 points, most of which came from James finding him open under the basket.

Seeing only three total minutes of playing time in the previous series, Haslem was the culprit of another defensive adjustment Spoelstra made for this series. The wily veteran, whose contributions and impact are rarely found in the box score, played 11 minutes and forced two first half fouls on Hibbert. Despite the adjustment, it wasn’t enough to keep Hibbert from being effective. The Pacers’ All-Star center finished with 19 points, nine rebounds and made nine of his 13 free throw attempts.

Other than the final score, the most glaring statistic from game one was the free throw attempts. Miami made 10 of its 15 free throw attempts, where Indiana made 29 out of an astounding 37 attempts.  The Heat defense seemed disinterested and unmotivated, committing 11 more fouls then their counterpart.

“That’s probably us at our worst defensively,” Spoelstra said. “You have to give them credit, they played well and we couldn’t get into a rhythm without fouling.”

James made a spectacular four-point play after draining a three point shot while getting fouled by George with four minutes remaining.  The free throw was just the second attempt for James, who finished second in the NBA with 10.9 attempts per game during the 2014 playoffs. For Miami to have a chance in any game, James will have to be more aggressive in getting to the free throw line.

77-percent of the time, the winner of game one of the Conference Finals, goes on to win the seven game series.  However, since the conception of the “Big Three” in 2010, Miami has won four playoff series despite losing game one.

“They got game one in their building; in this series, there is so much more basketball left,” Wade said. “These are two teams that can win in either building.”

The Heat will have a chance to even the series Tuesday before returning home to South Beach for two games.