Miami Heat-Indiana Pacers Game Four Preview: If You Come At The King, You Best Not Miss 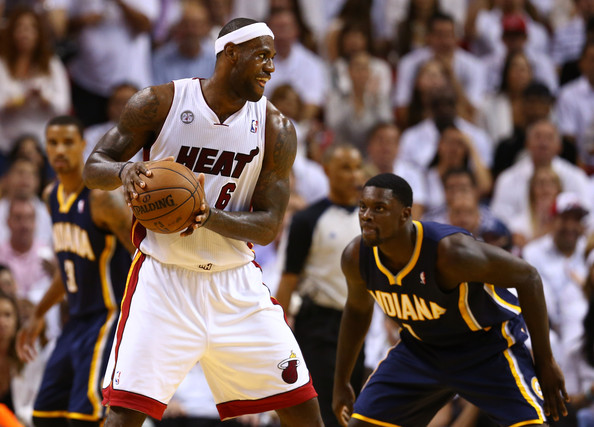 (Miami, FL)—In the playoffs, nothing is what it seems. The Miami Heat are in possession of a commanding 2-1 lead over the bruised Indiana Pacers, but a series isn’t over until one team wins four games. Sure, it’s an obvious point, but it’s important nonetheless. If the Heat continue to play with a sense of ruthless desperation, then they’ll continue to cruise.

They’re not playing a team that tends to wave the white flag, however. Indiana won their previous series against the Atlanta Hawks and Washington Wizards in come-from-behind fashion, but it remains to be seen if they can do it again against the defending champs. Either way, Indy has the right mindset. They’re a smashmouth contingent of headstrong and chippy players—perhaps to an almost detrimental extent.

Following their Game 3 loss, the Pacers’ do-it-all swingman Lance Stephenson claimed he had successfully intimidated Heat forward LeBron James due to uncharacteristic trash talk from James. ”To me, I think it’s a sign of weakness,” Stephenson said. ”He never used to say anything to me. I always used to be the one who said, `I’m going to do something to get you mad.’ Now he’s trying to do it to me. So I feel like it’s a weakness. I feel like I’m doing something right because I’m getting under his skin, but I’ve definitely got to keep stepping up to the plate and be more aggressive when he does that.” (Via SportsIllustrated) James refused to make the minor spat anymore than it was by saying, ”One thing I’m not going to do is give you all a storyline with LeBron and Stephenson. I’m not going to do that. It’s the Pacers versus the Heat.”

Clearly, LeBron isn’t intimidated, and you can bet his teammates aren’t either. Aside from talking like they mean business, Miami is playing like they mean business as well. After battling back from a double-digit deficit in Game 3, Miami completely turned the tables on Indy and ended up dominating a fourth quarter that culminated in a 12-point win for the defending champs. Although the Pacers held a confident lead for most of the early goings of Game 3, the story of the game appeared to be Indy’s gradual collapse, but it was more a testament to Miami’s resolve rather than Indiana’s inability to close.

The Pacers led early thanks to their interior presence and toughness. Their frontcourt duo—arguably their only clear advantage over Miami—of Roy Hibbert and David West combined for 29 points, but they were only able to snag a combined seven rebounds. Miami did an excellent job of negating Indy’s on-the-glass advantage, and it was clear that without successfully exploiting their size advantage, Indiana had very little chance in that contest. When the pace quickened, West and Hibbert merely became spectators as they helplessly watched Miami convert fastbreak opportunities off of 19 Indiana’s turnovers. For the Pacers to have a chance of winning tonight, they need to keep the pace as slow as it was in the first quarter of Game 3, take care of the basketball, and they desperately need more production from their wings as well.

Paul George had a mediocre shooting performance going 5-for-13 from the field and 60-percent from the free throw line on 10 attempts, and although his buddy Lance Stephenson tallied a double-double, he certainly wishes he’d keep his mouth shut. George responded to Lance’s barbs by saying, “”Sometimes he needs to keep things more in house and be a little more modest.” He also added, “He’s doing it to the wrong guy. He’s barking up the wrong tree. LeBron is the same way, he feeds off that kind of energy.”

George is absolutely right, but Stephenson should be respected for going right at the proverbial king. But when you come for the king’s crown, you best take it, because otherwise, you might end up destroyed in the process. Staring down the gun barrel of a possible 3-1 deficit, Lance understands Game 4 might make or break the series, but he also realizes Indy has been in this situation before.

“[Being down] is gonna help us… it’s gonna make us better.” Stephenson said, yesterday to the media (per NBA.com). “We just gotta pick it up. We gotta get a win tomorrow.”

They don’t call him “Born Ready” for nothing, but it remains to be seen if Stephenson’s big words are nothing more than empty talk.

Miami enjoyed great outings from Dwyane Wade, LeBron James, and Ray Allen. All three of Miami’s vets combined for 65 of the Heat’s 99 points, and Heat fans will look for them to continue their great production despite a recent shooting slump from starting big man Chris Bosh.

Despite the must-win importance of Game 4 for Indiana, the oddsmakers don’t like their chances. They tip-off at 8:30 PM tonight on ESPN as 6-point underdogs, and if Game 3 is any indication of what’s to come, Indiana might realize that trash-talking the greatest basketball player on earth isn’t such a good idea.