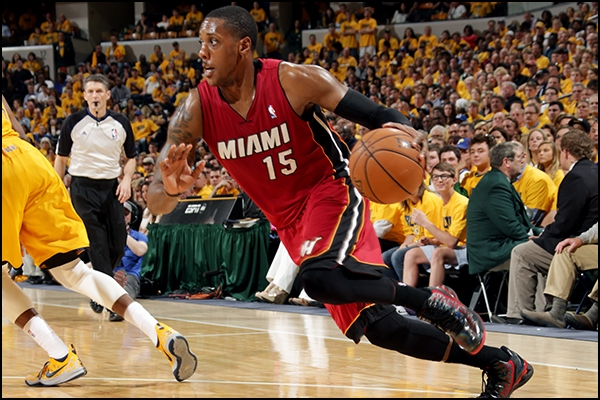 (Indianapolis, IN) — The Indiana Pacers were too big in Game 1 of the Eastern Conference Finals against the Miami Heat, who shrank by the quarter en route to a rough 107-96 loss Sunday at Bankers Life Fieldhouse.

In a game that never saw the Heat hold a lead, the inside-out ball movement of the Pacers made the Miami defense look uncharacteristically porous for a large portion of Sunday’s showdown, as the Pacers shot an astounding 51.5 percent from the field, its highest against Miami in any of the previous 13 playoff meetings. The Heat managed to also connect on 51 percent of its attempts Sunday, but their defensive pedigree is what brought South Beach two straight NBA titles, something that was lost due to a small lineup (LeBron James and Shane Battier playing the forward spots) and inability to keep the Pacers off the free throw line (29-of-37 to Miami’s 10-of-15).

Is it time to panic? Head Coach Erik Spoelstra isn’t sounding the alarm just yet, but the game 1 winner of the past two series (Heat) has gone on to win the series.

“We understand the urgency of our response tomorrow night,” Spoelstra said following Monday’s practice. “Across the board we weren’t sharp [in game one]. We understand that has to change.”

For Spoelstra to put forth a small lineup and rely on Shane Battier to defend Paul George was a head-scratching move that may have been solely based on Battier’s resurgence in the Eastern Conference Semifinals against the Brooklyn Nets, which saw Battier hang with Joe Johnson for a large portion of the series. George is younger, faster and more versatile than Johnson, as it showed in his 24-point outburst on a 7-of-13 clip.

“I believe Shane’s overall number was still a positive, but our overall disposition has to be much tougher, much stronger,” Spoelstra said. “There’s no question about it, regardless of who we have out on the court.”

Spoelstra may need to turn to Udonis Haslem and play Indiana eye-to-eye in Game 2 to get back home with a 1-1 split. Haslem (scoreless in 11 minutes) was as ineffective offensively as  Battier (three points, two rebounds in 16 minutes), but his starting the second half only led to being outscored 52-51 after trailing by 10 at intermission. Haslem’s presence rightfully pushes James back to the task of addressing George on the perimeter, as David West will finally have some physical opposition up front. When West shoots 73 percent from the field in any game, expect Indiana to coast from quarter to quarter.

The largest bulls eye lands on Chris Bosh, whose insubstantial play throughout Game 1 made Roy Hibbert feel like Roy Hibbert again, as Bosh laid bricks from beyond the arc for an 0-for-5 mark, finishing with nine points and getting a view of Hibbert dominate inside for 19 points and nine rebounds. Hibbert was allowed to play inside on both ends, a comfort zone that the Heat can’t endure if it expects to win. Bosh’s versatility on the floor is critical to the Heat’s game plan against the towering Hibbert, provided he finds his jumper in Game 2. “If it’s uncontested shots over the course of a series, if you continue to take them, it’s going to turn in your favor,” Bosh said. “(Sunday) was target practice, and I missed most of the targets, but I have a feel for it.”

“I’m just coming out here and worrying about the game plan and doing what I need to do—limiting the guy I need to guard individually, and trying to play as good a team ball as possible,” Wade said following practice. Team ball was the main difference between the two squads, as Miami will need a collective effort beyond just James and Wade to truly limit a Pacers squad that saw all five starters score at least 15 points. Playing small may have gotten them big results in previous meetings with the Pacers, but a 2-0 deficit could be too big for even the Big Three to handle.