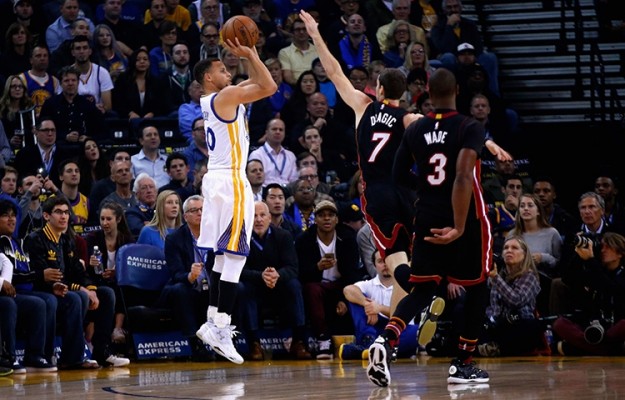 (Oakland, CA) — At the start of the fourth quarter, the Miami Heat were trailing by just three points at 80-77, when the Golden State Warriors proved that they were the much deeper team.

With all five of Golden State’s starters on the bench, the Warriors reserves, spearheaded by Marreese Speights, went on a 8-2 run to put the home team up for good.

“That’s a huge bonus for us,” said Warriors All-Star point guard Curry. “The starters, we played well, but didn’t sustain. They came in and took control of the game and got us to the finish line.”

Curry finished the night with 31 points and six assists and is continuing to make a strong campaign as the league’s MVP.

The Heat actually trailed by just six points as Luol Deng, who finished the night with a double-double (14 points and 10 boards), scored five points in a row with just 2:34 remaining in regulation.

However, the Warriors then ran off four unanswered points to seal the game for good.

“Every time you have a chance, if you make a mistake they really know how to capitalize,” Heat coach Erik Spoelstra said. “Our guys really played hard, did enough to give ourselves a chance. We couldn’t get over that hump to make it a possession game at the end.”

For the Heat, Dwyane Wade finished with a team-high 20 points to go along with 11 assists, and seven rebounds; while Chris Bosh added 15 points, 12 rebounds, and four assists.

The one silver lining that could have been made for the loss was the fact that Miami stayed within striking distance without it’s starting center Hassan Whiteside, who continues to deal with knee problems.
[xyz-ihs snippet=”Responsive-Ad”]