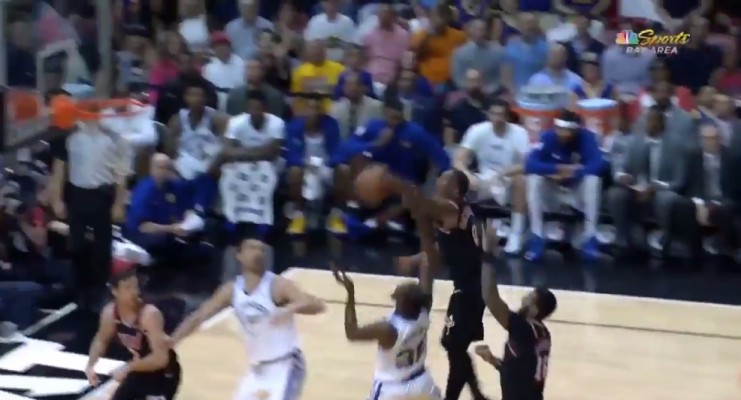 Bam Adebayo and Josh Richardson might be two stars in the making for the Miami Heat.

Adebayo has seen an uptick in his playing time as Hassan Whiteside sits out with a lingering knee injury and Richardson is beginning to cement himself as the Heat’s starting small forward. During Sunday’s game against the Golden State Warriors, both youngsters proved why head coach Erik Spoelstra has given them so many opportunities to succeed.

In the second quarter of Sunday’s matchup against the Warriors, Adebayo shut down two-time NBA MVP Steph Curry as he looked to get open for a shot. Curry was so overwhelmed by the 6-foot-10 rookie’s defense that he had to pass the ball off to Kevin Durant. Durant quickly drove to the basket, and just when it seemed like the defending NBA Finals MVP was going to get an easy layup, Richardson chased him down and slammed the ball into the stands with a come-from-behind block.

Bam Adebayo locks down Stephen Curry on the perimeter pic.twitter.com/Gx6gKYLHZN

While the Heat have fallen behind by a double-digit deficit in the second half, if Adebayo and Richardson are able to continue their lockdown defense, Miami could be celebrating a victory over the defending NBA champs to start out the week.
[xyz-ihs snippet=”HN-300×250-TextnImage”]