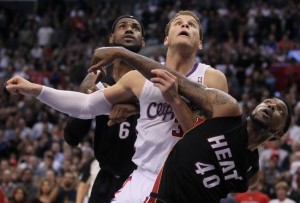 It only took 15 seconds for “Lob City” East MVP LeBron James to throw down a monster dunk in a shootout between the No.1 and No.3 ranked scoring offenses in the NBA.

However, a second half outburst by the Los Angeles Clippers lifted them to a 107-100 victory over the Miami Heat, spoiling the Heat’s attempt at a fourth straight victory.

Coming off of a remarkable 38 point and 10 rebound night in a heroic win over the Rockets, James’ encore performance did not disappoint.  James had 30 points and seven assists in the Heats’ third loss of the season against “Lob City” West at Staples Center in the ESPN primetime showcase Wednesday night.

For two years James has been adorned with as many boo’s as league awards, but the starlit crowd in Los Angeles graced him with mostly cheers on every rim rattler while still chanting for their home team.  Most noticeably for the Heat was their unselfish passing around the perimeter that also allowed James to operate in space and attack the paint.

“You just have to make him work,” Clippers forward Matt Barnes said about James before the game.  “He’s such a talented player; the scoring numbers aren’t always how he benefits his team the most. He controls the game through passing, through rebounding, through playing defense as well.”

Paul had the Clippers final 13 points of a 16-6 run to finish the third quarter where Los Angeles built an 85-74 lead over the defending NBA Champions.  In a back-and-forth duo that had 17 lead changes through three quarters, Los Angeles poured it on in the second half and never relinquished their lead.

“He is a big time player and is always aware of what it going on on the court.”  James said about his friend Chris Paul.  “That’s why I always felt he is the best point guard in the league.”

In the fourth game of a difficult six game road trip, Miami (6-3) lacked the energy and intensity in the second half to keep up with the fast paced Los Angeles’ offense. After leading 54-52 at halftime, Miami was outscored 33-20 in the third quarter and even trailed by 19 at one point.

Off of the bench, Rashard Lewis was tied with LBJ with 11 first half points to lead Miami in only nine minutes of work.   Lewis made all four of his shot attempts but did not manage to score in the second half.

Continuing to be an integral part of Miami’s offense, Ray Allen added 14 points to lead all Heat players not named LeBron.

Miami trailed the Clippers 25-24 after a fast paced first quarter that had seven lead changes with James scoring 10 points and Blake Griffin scoring 11 points to lead their squads.

“Our energy, effort, and activity were adequate for that quarter but we have to improve on that,” Heat Coach Erik Spoelstra said about the Heat’s first quarter.

Miami’s defense, ranked 24th in the NBA, continued to struggle against teams with great post players and even with a 9-0 run to cut the lead to 11 with three minutes left in the game, the Heat’s tank was riding on fumes trying to finish.

As the Clippers’ sixth man, Jamal Crawford came into the contest leading his team in scoring with 20.1 points per game.  Crawford continued his success in his first season with the Clippers, scoring 22 points on 7-of-11 shooting to lead Los Angeles.

“This is the most fun I have had since high school.”  Crawford said.  “This shows we can play with any team in the league.”

Although he did not get posterized like Pau Gasol and an array of other NBA players, the scrappy Shane Battier was no match for the size and athleticism of Blake Griffin.

With all 11 active players seeing playing time for the Clippers, Griffin had 20 points 14 rebounds and six assists.

Listed as a game time decision with a sore left foot, Dwyane Wade was not going to miss the showdown in the City of Angels against the surging Clippers.

“It’s sore but I’m out here to help my team win and do what I can even though I’m not 100 percent,” Wade said at halftime.

Both Chris Bosh and Wade had uncharacteristically poor nights shooting a dismal 5-of-23 combined for 17 points and were an afterthought for most of Miami’s offensive possessions.

Miami will look to rebound Thursday as they travel to Denver in a back-to-back game and a rematch of their 119-116 victory over the Nuggets on November 3rd.