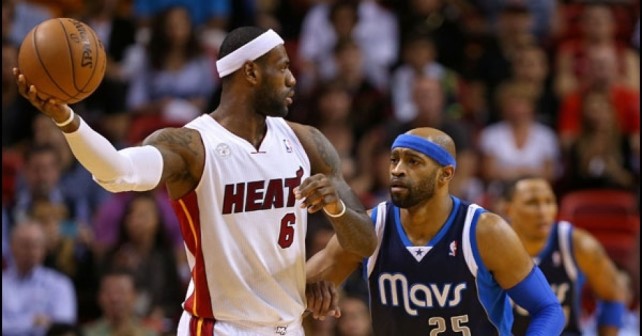 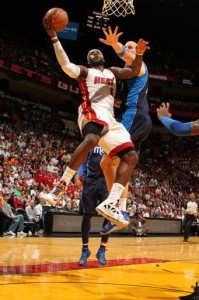 Associated Press: “James had 32 points 12 rebounds and nine assists, one shy of a triple-double yet again, after being named December’s Eastern Conference player of the month and continued his dominance into the new year.”

With his 51st consecutive game scoring 20 points or more LeBron James was the catalyst of a second half comeback, as the Miami Heat defeated the visiting Dallas Mavericks 119-109 in an overtime thriller.

In their third overtime game this season, and second straight, the Heat stayed unbeaten (3-0) by scoring seven straight points to open the period and road that momentum outscoring Dallas 16-6.

James made sure to bounce back from his missed game winner, converting three points on a drive and was fouled with 48.6 seconds left.  After knocking down the free throw Miami (22-8) led 118-109 and the play sealed the victory.

It was a fast-tempo game that had the atmosphere of the 2011 NBA Finals matchup at American Airlines Arena, as both teams pushed the pace in transition. The 119 points score by Miami was one shy of their season-high with 120 points scored against the Boston Celtics in the season opener.

“We aren’t that dominant where you can blow everyone out,” Wade said.  “You have to respect the other team’s ability and find a way to win.”

After a steal on the defensive end with 2:09 remaining in the second quarter, James took the ball end-to-end, finishing with a layup while he was fouled.   The three point play ignited the Miami crowd as the Heat erased a 44-34 Dallas lead and went into the locker room at halftime trailing 52-50.

It was the turning point in the game after Miami struggled, shooting just 37 percent from the field in the first half.  Two minutes into the second half, the Heat took the lead at 54-52 and made 10 of their first 13 shots of the third quarter.

Every instance where Dallas got within a points, James responded, whether it was on the drive, a contested jump shot, or a dish to an open shooter, he led Miami’s attack once again.  Active hands and rotating team defense allowed the Heat to force 13 Dallas turnovers, bad shots and 20 combined blocks and steals that led to 25 fast break points.

It was the seventh straight loss for Dallas (13-20) who blew a 12 point lead to the surging Heat.

James had 32 points 12 rebounds and nine assists, one shy of a triple-double yet again, after being named December’s Eastern Conference player of the month and continued his dominance into the new year.

Not to be outdone, Dwyane Wade scored 27 points and grabbed a season-high 10 rebounds for a rare double-double, but it was his involvement late in the game on both ends of the court that was crucial.

“When you are on the floor you have to do something, you have to make an impact,” Wade said

Chris Bosh stepped up, erupting in the third quarter, finishing with 17 points and had three blocks.

The “big three” came into the night averaging 65 combined points per game, and had 76 points in the victory.

Delivering on the skills that brought his talents to South Beach, Ray Allen scored 15 points and hit a pair of three’s in the final minutes to propel the Heat.

O.J. Mayo, formerly of the Memphis Grizzlies, paced the Mavericks with 30 points in a head-to-head battle with Wade.

The Mavericks seemed to run out of gas in the second half despite Mayo’s late game effort, which could have been a result of back-to-back games, none the less the Heat outplayed them in all facets in the final 24 minutes.

After missing the first 27 games of the season recovering from off-season knee surgery Nowitzki scored a season-high 19 points off of the bench in his sixth game back but sat out the overtime frame until the final minute after playing 28 minutes in regulation.

As expected center Chris Kaman outmuscled Bosh in the paint on his way to a double-double with 14 points and 10 rebounds.

Miami Improved their league best home record to 15-2 and will host the Chicago Bulls in an Eastern Conference showdown Friday night.

“We have a 3-game home stand we have to take care of,” Heat Coach Erik Spoelstra said.  “We want to make the most o these games and build that momentum.”