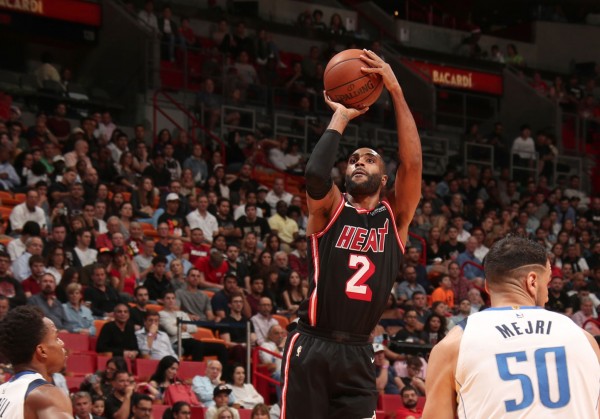 (Miami, FL) – The Miami Heat have been bitten by the injury bug in a big way as of late. In Friday night’s game against the Dallas Mavericks, the bug bit once again when shooting guard Dion Waiters went down with an ankle injury in the first quarter of the game.

At times throughout the game, it seemed like the depleted roster wasn’t going to be able to bring home the victory, but the tight-knit Miami squad showed resilience when it mattered most on its way to securing a convincing victory, 113-101.

While the Heat had led by double-digits at several different times throughout the first half, the score was all tied up by the beginning of the second half, 53-53. Just like Miami had done to open up the game, it busted out of the gates in the third period with a 12-0 run to go up, 65-53.

The Mavs slowly began chipping away at the Heat’s double-digit lead though, and by the end of the third quarter, the Heat were up nine points, 82-73. The Mavs then went on an 8-0 run and with 8:40 left in the game, Miami’s lead had been cut to just one point at 82-81.

It appeared that Miami was going to let another home victory slip through their fingers, but Wayne Ellington, who scored a team-high 28 points on 8-of-12 shooting from beyond the arc, came to the rescue. Shortly after Jordan Mickey hit a clutch field goal to bring the lead back to three points, Ellington hit back-to-back 3-pointers to push the lead back to nine. Josh Richardson, who had another strong night with 24 points, five assists, four rebounds, and two blocks, then helped the Heat reclaim a 10-point lead when he scored with just under seven minutes left in the game.

“Well we came into the locker room and we looked ourselves in the mirror,” Ellington said following the game. “We realized Dion went down. We realized we needed to come together collectively as a unit, and we knew that we needed this win. We needed to protect our home, we’ve been playing pretty well on the road so it was time to bring it here.”

The Mavericks refused to go away though. After a Yogi Ferrell field goal and a successful trip to the line by Wesley Matthews, Dallas was down just six points with 5:20 left in the game. The Heat weren’t out of the woods just yet, but when Tyler Johnson hit back-to-back long field goals, the American Airlines Arena crowd began to sense an impending victory.

The Mavs continued to battle, however, and with just over two minutes left in the game, they had cut the lead down to five points. Richardson and Ellington hit back when they both hit 3-pointers in a span of 30 seconds to give the Heat a 109-98 lead. Ferrell answered with a 3-pointer of his own, but Richardson responded by hitting one more clutch jumper to ice the contest with just under one minute left in the game.

Waiters’ early injury meant that the Heat were missing four starting-quality players for the vast majority of Friday night’s game. Despite that, they were able to stay the course and get the win. If the Heat had been fully healthy, it’s likely that the game would have been even more lopsided as they dominated in two key statistical aspects. Miami shot 63.9 percent from the field during the game and dominated the boards with 35 rebounds to Dallas’ 22. While it may be hard to continue that kind of lights-out shooting, it certainly bodes well for the rest of the 2017-18 season.

Throughout the game, Kelly Olynyk and Bam Adebayo were heavily depended upon to supply a presence in the paint, and both put in solid performances. While Olynyk did not repeat the dominant display he put up on Wednesday night against the Boston Celtics, he did end the game with 11 points, six rebounds, and two assists. Adebayo fared even better with 14 points, eight rebounds, and five assists. Miami also got surprise production out of guard Derrick Walton Jr. He has seen very little playing time so far this season, but when Waiters went down, Walton rose to the challenge and finished the game with seven points and five assists in 24 minutes of play.

Following the victory, Walton reflected on his contribution to the game.

“Before the injuries we was already a real close knit group, we already play for each other but this game was an extra incentive to do so,” Walton said. “It always hurt to see one of our brothers and teammates go down, but in hindsight they want us to do well in the opportunities that we get. So it gives you some confidence to go out there and play freely, but also to play for your brothers.”

Friday night’s game was a team win in every sense of the word. It was also a huge cause for celebration. For the first time this season, Miami is two games over .500 with a 17-15 record. With that record, it is now tied with the Washington Wizards for first place in the Southeast Division. They won’t get the chance to savor the victory, however, as they will be back on the court tomorrow night to face off against the New Orleans Pelicans.
[xyz-ihs snippet=”HN-300×250-TextnImage”]