Miami Heat vs. Boston Celtics Game Recap: Holding On For The Upset 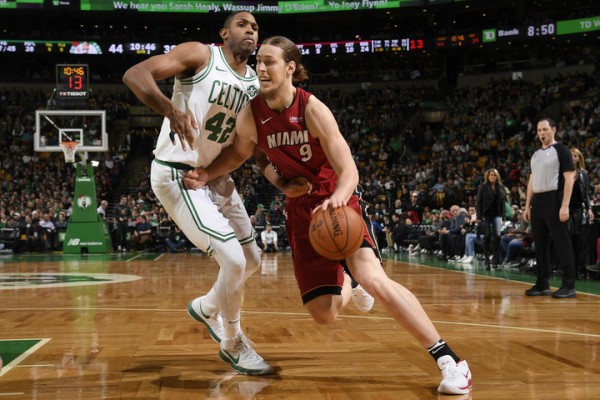 (Boston, MA) — A near collapse in the final 2:45 of the fourth quarter by the Miami Heat was narrowly averted and allowed them to hold on defeat the Boston Celtics by a score of 90-89 at TD Garden on Wednesday night. The upset victory puts the Heat back over the .500 mark on the year with a record of 16-15.

The injury-plagued Heat had held an 87-76 lead with 2:45 to go, but then watched the Celtics go on a 13-3 run down the stretch to slice the margin to a single point at 90-89 with 27.7 seconds left. The key to that surge was Boston’s Kyrie Irving, who scored nine of those points before then missing a potential game-winning shot at the buzzer.

“That was a fairly clean look, but we did enough things in the second half that put you in a position to win,” Heat head coach Erik Spoelstra said after the game. “Defensively, it was just a slow, grind-it, in-the-mud game.”

One of the main components of the Heat’s victory was the second-half offense provided by former Celtic Kelly Olynyk, who finished with a game-high 32 points and seven rebounds. A total of 25 of those were scored after halftime, with Josh Richardson scoring 11 of his 19 points on the evening after the break as well.

“Everybody was locked in and focused just telling me to go do my thing the entire time,” Olynyk said. “I just felt comfortable here and did what I could.”

The only other Heat player to score in double figures was Dion Waiters, who notched 10 points and six assists, while Tyler Johnson came close to a double-double with eight points and 11 boards, while adding five assists for good measure.

“K.O. (Olynyk) was tremendous, obviously,” Spoelstra said. “More than anything, he was a competitor tonight. That’s why we like having him on our side, but he was just aggressive, always looking for his shot.”

That late push by Boston helped slightly improve its poor numbers from the field over the final three quarters. During those three periods, the Celtics managed to shoot just 36 percent (20-of-56).

During the first quarter, it was the Heat that struggled from the field early on by missing 9-of-12 to start the contest. That allowed the Celtics to jump out to a 16-7 lead and eventually allow the margin to reach double-digits during the quarter.

Miami missed a golden opportunity to perhaps take the lead during the second quarter, primarily because of Boston’s chilly 35 percent (7-of-20) shooting from the field in the period. That’s because its attempts from the field largely mirrored its first-quarter efforts, which meant that it finished the half 1-of-12 from long-range.

The Celtics actually shot better on 3-pointers during those first two quarters, connecting on 7-of-13, a difference between the teams in that category which nearly matched their eight-point halftime margin.

In the third quarter, the Heat finally made their move, using a 19-4 run to turn a 49-43 deficit into a 62-53 lead with 2:51 left in the period. Solid defense on the part of Miami held Boston to just 24 percent (4-of-17) during the quarter, though the surge abruptly petered out.

In that remaining time, the Heat missed their last three shots, committed a trio of turnovers and allowed the Celtics’ Marcus Smart to hit consecutive 3-pointers that sliced the Heat’s advantage to 62-59 when the horn sounded to end the third.

“Feels unbelievable,” Olynyk said. “Basically just come in here and get a win. It was a big win for us after dropping one two nights ago. Just to get one more win, but to do it here against a really, really good team was huge.”

The Heat return home for a Friday night clash against the Dallas Mavericks that will tip off at just after 8 p.m. The following night, they’ll head into Christmas by hosting the New Orleans Pelicans with that tipoff set for the same time.
[xyz-ihs snippet=”HN-300×250-TextnImage”]