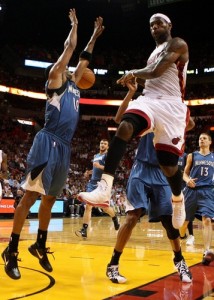 Getty Images, "Fortunately for the Heat, they’ll face a team Thursday that is one of only two in the league who are worse at rebounding than they are."

After playing 10 of their last 11 games at home, the Miami Heat will take their show on the road Thursday night with a trip to Dallas to take on the Mavericks for a 2011 NBA Finals rematch.

However, there will be very few familiar faces from that Dallas team on the court Thursday, with Shawn Marion and Rodrigue Beaubois the only remaining holdovers with Dirk Nowitzki still sidelined while recovering from knee surgery.

The Mavericks got off to a hot start without their superstar, winning four of their first five games, but they have cooled considerably since and come into Thursday with a 12-13 record.

A 107-100 win over Philadelphia on Tuesday snapped a three-game losing streak that featured road losses to Boston, Toronto, and Minnesota.

The road hasn’t been kind to the Mavericks this season with a 4-10 mark, but Dallas has been considerably better at home thus far, winning eight of its first 11 in front of the home crowd, including three in a row.

Those wins came against Detroit, Sacramento, and Philadelphia, but Thursday’s game will present a far greater challenge in the defending champion Heat, who have won two straight and four of their last five to move to 16-6 on the year.

Miami is coming off of an 11-point home win over the Minnesota Timberwolves, overcoming a season-high rebounding deficit of 53-24.

The Heat made up for the Wolves’ 29-rebound margin with hot shooting and pressure defense, knocking down 13 three-pointers and forcing 20 turnovers, which were converted into 25 points by Miami.

There were also 14 blocked shots and 12 steals produced by the Heat defense, which guard Dwyane Wade said was key in getting the victory.

“We got outrebounded, but we made up for it in other areas with our energy and effort,” he said. “But we’ve got to do a better job. Championship teams rebound the ball. It will take a better effort on our part. We’re not the biggest team, but we have to do a better job blocking out to keep it close.”

Miami is among the worst rebounding teams in the league, currently ranking 28th in the NBA in rebounding rate at -4.76.

But if Heat coach Erik Spoelstra is terribly concerned about his team’s inability to rebound at a high level when it matters most, he’s not showing it.

“Rebounding helps, but there are a lot of other factors for rebounding. If you go through the statistics in the playoffs and ranked them, that isn’t necessarily the biggest key. It’s possessions; however you get the extra possessions.”

Fortunately for the Heat, they’ll face a team Thursday that is one of only two in the league who are worse at rebounding than they are.

The Mavericks rank dead last in the NBA in rebound rate, facing a deficit of -6.85.

Dallas is being led by fifth-year guard OJ Mayo, who is having a breakout season after being acquired by the Mavericks as a free agent in the summer after spending his first four years with the Memphis Grizzlies.

Mayo is averaging a career best 20.6 points per game on 48.8 percent shooting, including 51.9 percent from the three-point line.

The second and third scorers are also free agent pickups from the summer in Chris Kaman (14.3 ppg) and Darren Collison (12.2 ppg).

Conversely, the Heat continue to be led by the big three of LeBron James, Wade, and Chris Bosh, with James putting together another MVP-caliber season, averaging 25.2 points, 8.5 rebounds, 6.9 assists – all team highs – and shooting 53.7 percent from the field and 42.3 percent from the three-point line.

James put in 22 points, 11 assists, seven rebounds, four blocked shots, and no turnovers in the win over Minnesota, but saw his 10-game streak of shooting 50 percent or better from the field come to an end with an 8-of-18 effort.

Wade came through with one of his best performances of the season, scoring 24 points on 8-of-14 shooting in just 27 minutes of action to go along with two blocks, two steals, and only one turnover.

The future Hall of Fame guard has now converted 38 of his last 58 shots (.655) to improve his season shooting percentage to .511.

Thursday’s matchup begins a stretch of five road games in the next seven for the Heat, with the week ending Saturday with a home game against Utah before the big Christmas Day meeting with 2012 Finals opponent Oklahoma City in Miami.