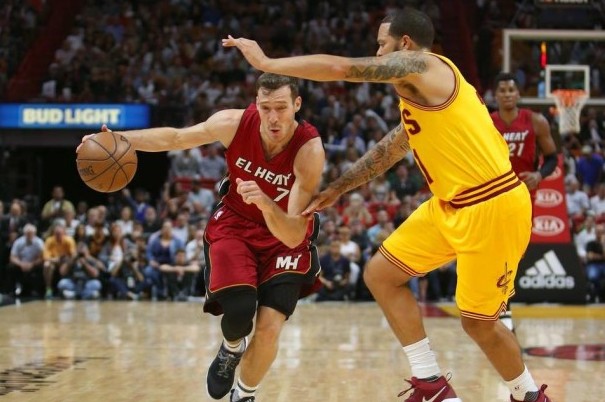 (Miami, FL) – Following a 110-99 loss to the Orlando Magic on Friday night, the Miami Heat (29-34) bounced back with a strong performance on Saturday night with a 120-92 thrashing of the undermanned Cleveland Cavaliers (42-19) at American Airlines Arena.

The Cavs, who decided to rest their two superstars in small forward LeBron James and point guard Kyrie Irving for Saturday’s game, trailed by as many as 31 points in the fourth quarter and simply couldn’t keep up with the Heat for most of the contest.

“Even though our offense has been trending much, much better in the last several weeks, our identity has to commit to the little and tough things defensively,” Heat head coach Erik Spoelstra said in his postgame press conference.

Miami point guard Goran Dragic had a game-high 23 points, five assists, three rebounds and shot an impressive 9-of-12 from the field, including 4-of-5 from behind the arc.

“Play with energy and play together. We forced them to shoot long, contested shots and we played together on offense,” Dragic said after the game.

Heat star center Hassan Whiteside had 20 points and 13 rebounds, while guards Tyler Johnson and Wayne Ellington both came off the bench to score 17 and 12 points, respectively.

Johnson, who had a team-high two steals on the night, helped Miami shoot 18-of-34 as a team from three-point range and forced Cleveland to turn the ball over 15 times.

“We realize how important it is to get these victories. We’re just playing better basketball at this time of the season, so I don’t think we’re putting any special effort into it,” Johnson said. “We understand that when we come into this building, especially when we’re striving for the playoffs, that this needs to be a building we get Ws in.”

For the Cavs, power forward Channing Frye came off the bench to lead his team in scoring with 21 points (9-of-12 from the field and 3-of-5 from three-point range) and four rebounds, while shooting guard Kyle Korver had 15 points and two assists.

In the final seconds of the game, things got chippy between both the Miami and Cleveland benches when J.R. Smith, who did not play due to his thumb injury, and Heat shooting guard Dion Waiters exchanged heated words with each other. Smith, who has not played since Dec. 20th, had to be escorted by security to the Cavs’ locker room.

Up next, the Heat will hit the road to face the Cavs again on Monday night at Quicken Loans Arena with James and Irving likely back in the lineup. The contest, which is scheduled to tip off shortly after 7:30 p.m. ET, will be broadcast live locally on Fox Sports Sun.
[xyz-ihs snippet=”Responsive-ImagenText”]