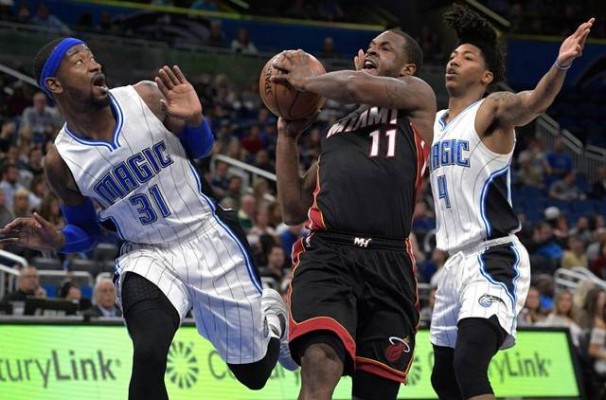 (Orlando, FL) – In an underwhelming performance versus their in-state rivals, the Miami Heat (28-34) lost their second consecutive road contest on Friday night as they fell 110-99 to the Orlando Magic (23-39) at Amway Center.

Miami did not have much of an answer for Orlando center Nikola Vucevic, who finished with a game-high 25 points (11-of-18 from the field) to go along with nine rebounds and three blocked shots.

“I think there’s a way they play and a way they defend that gives me a lot of different looks,” Vucevic said. “Tonight, we played great team basketball. We really moved the ball offensively, and defensively we were active. We’re helping each other and it showed.”

In his third double-double effort of the season, Magic power forward Aaron Gordon finished with 21 points and 10 rebounds, with 17 of those points and nine of those rebounds coming in the first half alone.

After the Heat won their first matchup in Orlando on opening night back in late October, the Magic have now won three straight games against the Heat to take the regular season series 3-1.

“This season, we haven’t been able to get a handle on these guys,” Heat head coach Erik Spoelstra said after the game. “It’s frustrating for everybody in the locker room, but you tip your hat to Orlando because for three straight games they’ve been able to out-speed us, out-quick us, out-hustle us and put a lot of points on the board.”

As a team, the Heat could not get much going on the offensive end, especially between their starting guards. Between the two, point guard Goran Dragic and shooting guard Dion Waiters shot a dreadful 4-of-25 combined from the field for 15 and three points, respectively.

Although Waiters had one of his worst offensive games in a Heat uniform, Dragic managed to make 9-of-11 free throws and the Heat finished 21-of-25 from the charity stripe as a team.

With just four minutes remaining in the fourth quarter, the Heat managed to cut the Magic lead down to just 97-91, but failed to get any closer than that for the rest of the game.

Up next, the Heat will head home to take on the defending-champion Cleveland Cavaliers (42-18) at American Airlines Arena on Saturday night. The contest, which is scheduled to tip off shortly after 8:00 p.m. ET, will be broadcast live locally on Fox Sports Sun.
[xyz-ihs snippet=”Responsive-ImagenText”]