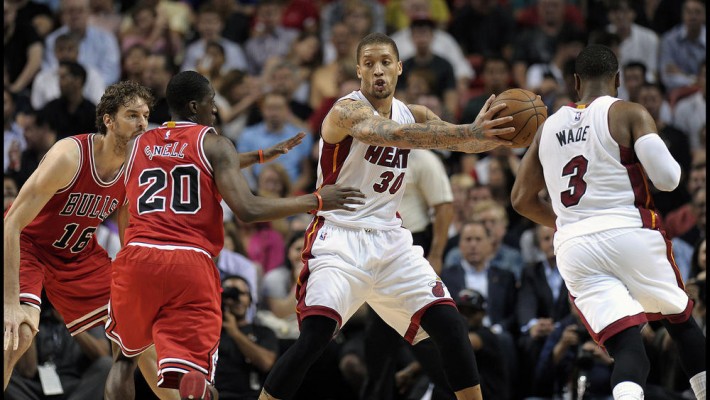 (Miami, FL) — Despite boasting a 19-point lead at halftime, the Miami Heat (35-44) absolutely fell apart in the second half Thursday night en route to an 89-78 loss at the hands of the Chicago Bulls (47-32) at American Airlines Arena.

Michael Beasley, who returned from an illness that caused him to miss Miami’s 105-100 win over the Charlotte Hornets on Tuesday night, was superb in the first half as he scored 13 points (five of six from the field) and had two rebounds.

However, after Miami led 51-32 at the half, Beasley and the rest of the Heat were completely outplayed in the third quarter as Chicago outscored them by an embarrassing 33-8 margin during that stretch.

Dwyane Wade, who had a dismal game with only nine points (four of 20 shooting from the field), three assists and three rebounds, still has faith in the team’s playoff hopes.

“We’ve got 3 games left, as long as we’re still in it we’ll be good,” said Wade after the game. “You just keep coming back until they tell you your season is over. This is not going to detour us from playing our game.”

For the Bulls, they came out of halftime on fire as Miami’s 19-point lead disappeared in less than 10 minutes of action into the third, as Chicago tied the game at 57 apiece with 2:40 remaining in the quarter.

“We’re all frustrated,” said a disappointed Heat head coach Erik Spoelstra in his post-game press conference. “We’re all embarrassed when you’re in those situations and you can’t stop an avalanche like that.”

“Once we started getting into them, getting rebounds, containing them to one shot, things turned around,” said Gasol after the game.

Point guard Derrick Rose, the MVP for the 2010-2011 regular season, played in his second game back after a surgical procedure on his right knee. He was given a 20-minute playing time limit by Bulls head coach Tom Thibodeau, but in that span Rose scored 12 points (five of 12 from the floor) to go with his four rebounds and two assists.

As for the Heat, Hassan Whiteside had yet another double-double effort with 19 points and 16 rebounds on Thursday night. Goran Dragic scored in double figures as well with 15 points, while Luol Deng added eight points, eight rebounds and four assists.

With only three games remaining for the Heat in the regular season, they obviously must focus on winning all three contests, but 10th-seeded Miami might also need some help from other teams to knock back the Boston Celtics (36-42), the Brooklyn Nets (36-42) and the Indiana Pacers (35-43).

Up next on their schedule, the Heat will host the Toronto Raptors (46-32) on Saturday night at American Airlines Arena. The game, which is slated to tip off shortly after 7:30 pm ET, will be broadcast nationally on NBATV.
[xyz-ihs snippet=”Responsive-Ad”]