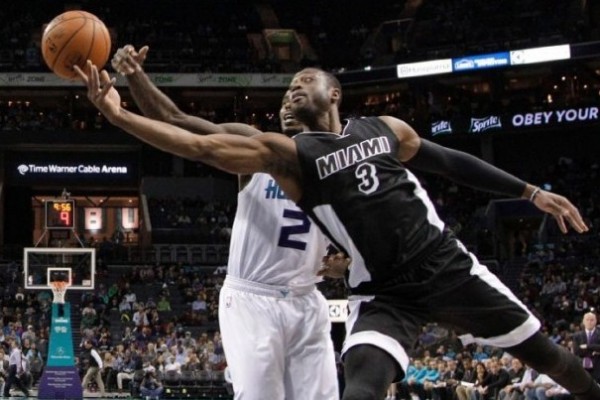 “It was a good ole fashioned butt whooping,” said power forward Chris Bosh, who finished with only seven points.

Team turnovers (18) and poor three-point shooting (6-of-21) trumped the Heat on the night, as Miami dropped their second straight game by double digits.

“I’ve been cautioning everybody we’re just not there yet,” said Heat shooting guard Dwyane Wade (11 points and 4 assists) after the loss. “It’s going to take a while.”

Hornets point guard Kemba Walker, who averages 17.4 points, 4.7 assists and four rebounds per game this season, had another great outing with 18 points (8-of-13 shooting from the field), five rebounds, a whopping five steals and four assists. Power forward Marvin Williams also had himself an efficient night with 18 points (7-of-11 from the floor) and four boards.

“We just want to win,” said Walker. “We’re starting to realize how good we can be.”

Charlotte shooting guard Nicholas Batum, who quietly had a triple-double, finished the game with 10 points, 11 rebounds and 11 assists.

Miami, who trailed by 20 points at the half and as many as 30 points early in the fourth quarter, allowed Charlotte to shoot 40-of-81 from the field as a team on the night.

“We talk about these things but we don’t do it,” said Bosh. “We’ve had enough conversations. I don’t know how many speaks (UD) has to give.”

Off the bench, Heat shooting guard Tyler Johnson led all scorers with 20 points (6-of-12 from the field) to go along with two rebounds and two assists. Starting shooting guard Gerald Green also scored in double figures for Miami with 11 points and three boards.

Up next, the Heat will travel to the Midwest to take on the Indiana Pacers (12-8) at Bankers Life Fieldhouse on Friday night. The contest, which will tip off shortly after 7:00 pm ET, will be broadcast nationally on ESPN.
[xyz-ihs snippet=”Responsive-Ad”]