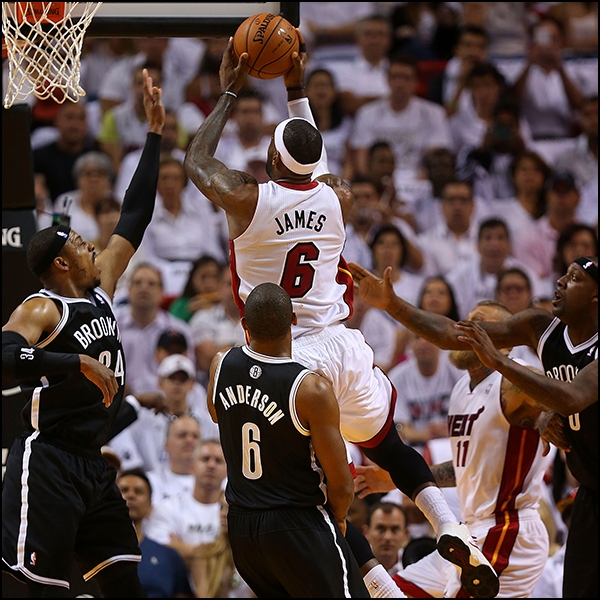 In a nutshell, the theory says this: the team that wins one game in a series will typically fail to win or cover (the point-spread) the following game, hence the name, “zig-zag.” You’re probably saying, “Ok, Eric, I thought this was a game preview, why are you talking about some old degenerate gambling theory?”

Here’s why: it tends to hold true.

According to SportsInsights, As of April 12th, 2014, the Zig-Zag theory is 210-184 if you were to just blindly bet opposite sides of point-spreads in proceeding playoff games.

On May 6th, 2014, in Game One of the 2014 Eastern Conference semi-finals, the Brooklyn Nets were 7-point underdogs against the Miami Heat. The Heat cruised to victory in dominating fashion. LeBron James, Dwyane Wade, and Chris Bosh all tallied double digits, and they held Brooklyn to 47-percent shooting while the Heat shot over 56-percent for the game. Miami played as great a basketball game as you can possibly play despite their terrible regular season performance against the Nets.

Considering their 4-0 season sweep of the Heat, the intense rivalry over the years between Paul Pierce and LeBron, and the fact Miami might be rusty after a relatively easy series against the Bobcats, a lot of people liked Brooklyn to win this game or at least keep it close; like seven points or less close.

Clearly, Miami wasn’t rusty, and James emphasized the importance of staying ready following the Game One rout to the postgame media.

“We got in the gym…we made each other accountable throughout the layoff and it proved tonight.” (per ESPN.com)

LeBron’s quote epitomized the Heat’s performance—they held each other accountable, and they made sure their previously poor performances wouldn’t happen again in the playoffs.

Only time will tell, but if history tells us anything, the zig-zag theory tends to hold true. That means, according to the theory, Brooklyn will likely come out and cover the next game (keep it close) or possibly even win it.

If Deron Williams and Joe Johnson combine for 34 points on combined 66-percent shooting yet again as they did in Game One, their odds of winning Game Two drastically increase. Offensively, Brooklyn didn’t look terrible—it was their energy and defense that looks deplorable.

On the season, Brooklyn’s opponents average around 99 points per game on average while Brooklyn scores 98 points per game. They’re not a spectacular offensive team, and they’re not a great defensive team either. If Brooklyn has a chance to win, it would be through getting the battle to their best isolation players and hoping they have big nights.

Pierce’s lack of offense in Game One came from a combination of missing shots he normally makes, and LeBron James’ stellar defensive effort. The Nets need to help Pierce get free next game, and that will come from screens, and a little bit of rest wouldn’t hurt either.

A 36-year old Pierce going up against LeBron in his prime at this stage in their careers is a clear mismatch. Unless he’s rested with fresh legs, Pierce is going to look flat offensively. His entire game is predicated off of his footwork as well as his jumpshot, and with that in mind, rest and preparedness is vital, and sometimes you have to concede the battle to win the war.

Kevin Garnett’s 16 minutes of playing time was yet another sign Jason Kidd was willing to give this game away. It’s clear that the Raptors series took a lot out of Brooklyn, and this terrible defensive effort was the result.

The pace of the game didn’t help things either. The bricks thrown up by various Nets players turned into transition opportunities for Miami, and if the pace is as quick as it was in the second half, Brooklyn will yet again be wiped out in Game Two.

Brooklyn’s older players will be run ragged if they have to play another series like the one they played against Toronto. The slower the pace, the more they can preserve Pierce and KG.

Ensuring Pierce and Garnett can play is vital to the team’s chances in this series, and if they want to win Game Two, they need more out of both of them, and Coach Spo expects Brooklyn to try and get them more involved for Game Two. “We expect a better performance from all of them—this a veteran team. When you play in a lot of playoff games like that, you don’t get caught up in what the score was.” Spoelstra’s observation at Wednesday’s practice was obvious, but it was a perfect response. He knows just as the rest of the Heat like do; Brooklyn isn’t going to go down without a fight, and one game doesn’t tell the whole story.

Regardless, Brooklyn needs to defend better, and they also need to key in on guys like Ray Allen. Allen dropped 19 on their heads off the bench, and it’s clear the rest did the similarly aged Allen plenty of good.

In regards to his performance in Game One, Ray attributed his offensive success to the team’s selflessness in a practice interview on Wednesday. “We had great ball movement. When I came into the game there were shots that were consistent that I had throughout the year…everybody made plays for each other.”

In Game Two, expect a better effort from Brooklyn, but don’t expect anything different from Miami. Erik Spoelstra knows how important this series is, and the quicker this series ends, the more rest they’ll have for the next round.

A Game Two victory means all of the pressure is on Brooklyn to defend their homecourt, and if LeBron and company can steal just one game in Brooklyn, it might as well be all she wrote if the series becomes 3-1 in favor of Miami.

In response to his team’s victory in Game One, head coach Erik Spoelstra remarked, “It’s one.”

Indeed it is, but it was a powerful response to the doubters claiming Miami would be in trouble for this series.

If the Zig-Zag theory holds true, Brooklyn will come out with more fight in Game Two, and LeBron is ready for it.

“We’re a very aggressive team,” LeBron said to the press during Wednesday’s practice, “We don’t shy away from a team that’s going to play more aggressive in game two. We accept the challenge and go at’em and live with the results.”

Clearly, LeBron and company are ready for the impending fight they have ahead of themselves.

Assuming the Heat’s collective commitment to defense over everything holds true as it usually does, it’s safe to say that Brooklyn’s regular season sweep was nothing more than a fluke.

That you can bet on.