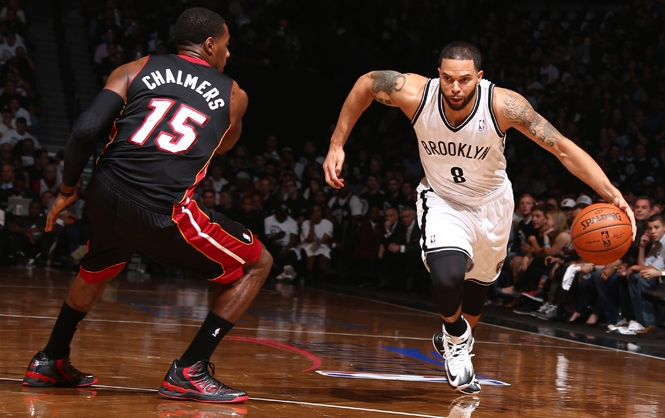 (Brooklyn, NY) — It is referred to as the great equalizer. The three point shot, conceived and adopted by the NBA in 1979, has allowed for teams to obliterate seemingly insurmountable leads, finish games in blowout fashion or send the other team packing with a buzzer-beating win.

The Brooklyn Nets connected on 15 three point shots, the most for a playoff team this year, and found a way at home to shoot, rather than crawl their way back into this series with a 104-90 Game Three win over the Miami Heat.

“It was a team effort with everyone contributing,” Brooklyn Head Coach Jason Kidd said. “We stuck to the game plan and we found a way to win.”

Coming out of the gate, Miami was clicking on all cylinders offensively, moving the ball around and tallying 30 points in the first quarter.  However, the Heat was outscored 46-33 in the second and third quarters combined and by 12 points in the third quarter alone. Looking to find his shot, Dwyane Wade stayed aggressive in the second half despite the large discrepancy that was the score, finishing with 20 points.

“We were in a good enough flow in the first half,” Miami Head Coach Erik Spoelstra said. “To sum it up, they outplayed us, specifically in the second half.”

Three minutes into the second half, Paul Pierce picked up an uncandid fourth personal foul after wrestling with the scrappy, Shane Battier for a rebound.  With Pierce out, Brooklyn turned to their bench duo of Andray Blatche and Mirza Teletovic to light a spark for the home team.

The Nets continued to pour it on, reaching a 74-61 lead after Teletovic nailed a smooth jumper from beyond the arc which brought the Barclay’s Center crowd to a roar. It was at this moment in the game that the momentum was clearly in Brooklyn’s favor and they were not going to let this game slip.  After connecting on six shots from deep in Game Two, Teletovic scored 12 for an encore performance. Blatche finished with 15 points and 10 rebounds to lead all players off the bench.

“Our bench has been big for us,” Kidd said. “The big thing about this team is we trust everyone.”

Down 85-67, things got physical between Ray Allen and Alan Anderson after a tie up escalated the hostility, causing the enforcers of Kevin Garnett and Chris Andersen to step in as well as both head coaches. After the officials congregated and sorted the situation out, both Allen and Anderson were assessed technical fouls.  It was clearly a venting of frustration from the Heat who could not close the gap that Brooklyn built in the third quarter.

“They got into a great rhythm, even their [two point shots] were open, especially in the second half, “Spoelstra said. “They have guys who can knock down shots and they moved the ball well.”

Upon his return to the lineup, Pierce was fouled after draining a three point shot which extended the lead to a series high 20-points and brought former Nets minority owner and hip hop mogul Jay-Z out of his courtside seat to applaud.

With two minutes remaining, Ray Allen utilized a shot fake from his usual three point spot, and drove to the basket for a layup. The basket brought the Heat back within 12 points as 96-84, forcing Kidd to call a timeout. After regrouping, Livingston came out of the timeout and through down a ferocious dunk, seemingly flushing Miami’s chance at a comeback.

Unlike Brooklyn, Miami did not receive any sort of meaningful contribution from players not named James and Wade.  Brooklyn outscored Miami’s bench 40-25 and no other player outside of the “Big Three” scored in double figures for the Heat. The Nets on the contrary, had six players finish in double figures led by All-Star guard Joe Johnson’s 19 points and five made three pointers.

“He is one of the leaders of the team and he is playing extremely well for us,” Kidd said about Johnson.

LeBron James did what he could to keep it respectable, finishing with 28 points, eight rebounds and five assists; all of which were team highs. For Miami to avoid dropping both games in Brooklyn and prevent the series from being tied 2-2, they will need to find a way to involve the other role players in the offense and drastically improve their defense on the perimeter in Game 4.

“They have a good defensive team; you can’t attack them mono y mono you, have to work together and 13 assists will not get it done,” Spoelstra said.