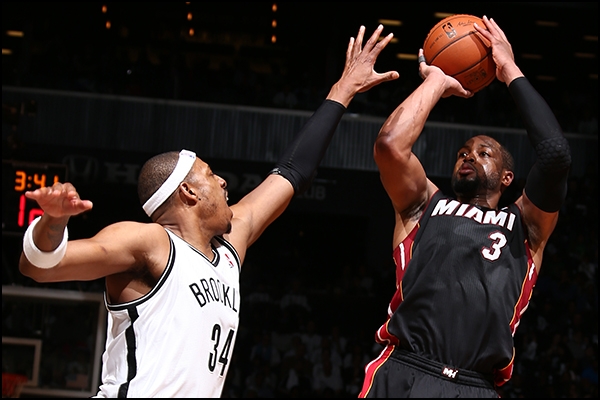 (Brooklyn, NY) — On Saturday the forecast in Brooklyn, New York called for partly cloudy skies, but inside the Barclay’s Center it was raining three point shots.

The Brooklyn Nets handed the Miami Heat its first playoff loss in the 2014 campaign with a 104-90 blowout in game three.

In the first two games of the series, Miami held Brooklyn under 85 points but it was the lack of effort on defense, combined with miscommunication on pick-and-roll switches that resulted in the loss. Well, that and the 15 three pointers the Nets drained on their home court.

“I don’t think there was enough sense of urgency defensively,” LeBron James said. “We allowed them to get too many rebounds, second chance points and open looks.”

For the most part, Miami has limited Brooklyn’s star players. Deron Williams is averaging only 8.6 points per game and was held scoreless in game two. Paul Pierce, a familiar foe who has averaged 20.9 points per game during his illustrious playoff career, has been held to 11.6 points per game. Despite the ability to limit the scoring totals of certain Brooklyn key players, being out rebounded by 16 allowed for second chance points that the Nets did not get in the first two games.

“We weren’t going to panic, we aren’t scared of them,” Pierce said. “All they did was hold up home court, now it’s our turn to hold up our home court.”

All-Star guard Joe Johnson leads the Nets with 16.3 points per game over the first three games of the series. He scored a series high 19 points, connecting on five-of-seven shots from beyond the arc in game three. As a collective unit, Miami’s defense will need to hone in on Johnson, who at 6-foot-7-inches tall, has a distinct advantage when the shorter Dwyane Wade is guarding him the majority of the time.

“Joe (Johnson) is a great player,” James said. “He is a matchup problem for a lot of defenses and he makes tough, contested shots.”

In game three, Brooklyn made 38 total shots, 15 of which were three pointers, connecting on a remarkable 60-percent of their shots from deep. The Heat will need to focus on contesting Brooklyn’s shooters and limit their opportunity for open looks the same way they did in the first two games in Miami.

“We will make adjustments going into game four,” James said. “We have to shrink the floor on the perimeter guys and close out on their shooters.”

James continues to shine offensively for the two-time defending NBA champions. Averaging 24.0 points per game this series, James scored a series high 28 points in game three, 16 of which were in the first quarter alone. For continued success this series, James will have to take more than the 15 shots he took in game three and look to stay aggressive in the second half.

In each of the first two games of the series, the Heat spread the ball around, allowing five players to score in double figure, yet in game three only the “Big Three” managed to do so. It is imperative that role players such as Shane Battier, Mario Chalmers, and Ray Allen effectively contribute on the offensive end.

“They played a better game than us,” James said. “We had some mistakes that we can clean up but also just understanding that this is a series.”

The magnitude of winning game four does not have to be explained to the defending champions. Losing game four will create a best-of-three series of sorts, whereas taking game four would allow for Miami to need just one of those three games to move on to the Eastern Conference Finals.

In a seven game series, it has often been referred, that the series doesn’t actually begin until the home team loses. With a road victory in game four, Miami will begin the series by being one step closer to ending it.

Notes: Each of the first three games of the series has been won by double-digit margins. Game Four at Brooklyn, NY Monday May, 12 8P.M. ET on TNT