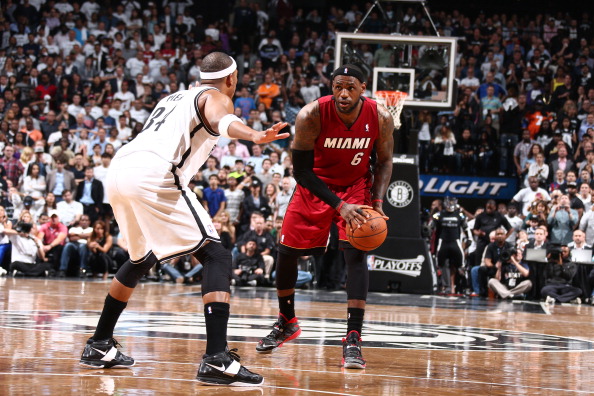 (Miami, FL) — Brooklyn may not be “Broadway” but LeBron James took center stage and put on a show for the ages in game four of the Eastern Conference Semifinals.

Alike the red hot color of the road jersey he adorned, James started game four with 12 first quarter points, similarly to the 16 first quarter points he scored in game three. Unlike game three, James stayed aggressive throughout the entirety of game four, scoring 25 of Miami’s 56 first half points, and when the final buzzer sounded, tied a playoff career high with 49 points scored.

James’ efforts propelled the Miami Heat to a 102-96 victory over the Brooklyn Nets on Monday to take a commanding 3-1 lead in the best-of-seven series. For the second game in-a-row, James did not receive much help from his teammates, who seemed out of rhythm when looking for their shot in game four. Regardless, the four-time regular season Most Valuable Player willed his team to a crucial victory as he has done countless times before.

“I had to be in attack mode on the road,” James said.

As the case has always been, Miami’s “Big Three” did the vast majority of scoring, but role players Mario Chalmers and Ray Allen awoke from their lackadaisical game three efforts. Chalmers scored eight points, right around his regular season average of 9.8 points per game but more importantly, dished out a team high seven assists. Allen has uncharacteristically struggled from the three point line connecting on just one of his last six shots over the past two games, but his continual effort on the glass rewarded him with seven rebounds to lead all Heat players.

Dwyane Wade has done his part by scoring 15.8 points per game this series, but most significantly, he has given way to James’ ability to dominate offensively and has been efficient in his shot selection.

At this rate, the question remains if James will have the stamina to continue to shoulder the load for the Heat, who is still nine victories away from being NBA Champions for the third consecutive year.

“This guy has to carry so much weight for this team,” Charles Barkley said about James.

Miami’s inability to keep Brooklyn off the glass, specifically on the offensive end, resulted in extra possessions and second chance points for the Nets that nearly cost the Heat two straight games. Although the Heat found a way at the end to hang on to the lead in game four, the potential of losing and going into game five tied 2-2 was real with just two minutes remaining.

In game four, fouls seemed to be a bit harder, emphatic slam dunks rattled the rim with more authority and the focus on the face of “King James” intensified. Miami made necessary adjustments to close out on Brooklyn’s perimeter shooters, an aspect of their game that was absent in game three. After surrendering 15 made three point shots in their game three loss, the Heat held the Nets to 5-of-22 shots from deep Monday night. Nonetheless, as entertaining as game four was, the stage is set for game five to be even more riveting.

On Wednesday, Miami will be back on their home court at the American Airlines Arena, a place where they are undefeated in this year’s playoffs, with a chance to move on to the Eastern Conference Finals. With the top overall seeded Indian Pacers on the fringe of the same goal, the pressure is on Miami to wrap this series up.

“We are going to have to go back [home] and regroup,” Miami Head Coach Erik Spoelstra said. “We have respect for this team and there is nothing easy that is going to happen in this series.”